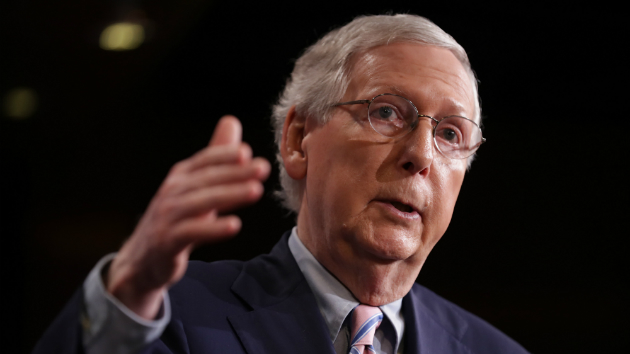 Chip Somodevilla/Getty Images(WASHINGTON) — The White House and outside supporters of the Senate criminal justice reform bill have grown increasingly frustrated with Senate Majority Leader Mitch McConnell’s handling of the legislation, multiple sources familiar with the matter inside and outside the administration tell ABC News.
McConnell, R-Kentucky, according to the sources, had previously pledged to put the bill on the floor if it could be demonstrated that there would be 60 votes for the measure, but he has since called for finding greater consensus within the Republican conference, instead, something supporters say is a higher bar.
One supporter recalled McConnell reassuring the bill’s backers before the midterms that he would bring the bill to the floor after the midterm election.
“Look we’re not doing it before, we’re doing it after and you’re likely to get the outcome you want because the votes are there,” the source, who spoke on the condition on anonymity, recalls McConnell saying in a meeting before the election.
“There’s frustration,” the source said, contending that there is already enough support within the conference for the bill to pass the bill in the Senate.
Jessica Jackson Sloan, the co-founder of the pro-criminal justice reform group Cut 50 that has been pushing the legislation, blamed outspoken opponents to the bill, like Sen. Tom Cotton, R-Ark., for holding the bill hostage.
“A very small and vocal group of senators are obstructing us from being able to get a vote and causing McConnell to move the goal posts,” Jackson Sloan said.
One supporter noted that, in spite of the frustrations, there is also a sense that McConnell is coming around to taking the legislation seriously and looking ahead to where the legislation could fit into the calendar, advising senators that they may need to be prepared to stick around past Dec. 20 to deal with judicial nominations and criminal justice reform.
An administration source contended that McConnell has been completely consistent throughout the process and suggested that the bill’s sponsors are actually upset because there’s less support within the conference than the co-sponsors had forecasted.
Contacted for comment by ABC News, McConnell’s deputy chief of staff Don Stewart said, “Senators are reviewing the legislation and suggesting changes.”
McConnell reiterated last week that he remains committed to carrying out a whip count to gauge GOP support.
"We'll be whipping that to see whether what the consensus is, if there is a consensus, in our conference about not only the substance but the timing of moving forward with that particular piece of legislation,” McConnell said last week about the bill known as the First Step Act.
That same day, Jared Kushner and Vice President Mike Pence were on Capitol Hill to personally lobby Republican senators during their weekly conference lunch. Kushner is a primary supporter of the bill. Aides in the room say there was also an intense session with opponents voicing their concerns.
The core of conservative Republicans have said they are deeply concerned that the bill could result in the release of dangerous criminals and drug traffickers, something supporters of the bill counter is a false argument since the legislation is geared toward non-violent offenders.
The frustrations come as potential changes to the bill are being circulated by the administration, according to two administration officials, with an eye toward garnering greater support among those conservatives who could slow down any vote on the measure, as well as sheriffs who have come out to publicly state their points of opposition to the bill, administration sources and outside supporters said.
Sen. John Cornyn, R-Texas, who is a leading advocate for the criminal justice reform in the Senate, told Hugh Hewitt that there are considerations about how to make the bill more palatable to the sheriffs and acknowledged the clock is running out.
“The Sheriff’s Association has pointed out five issues where they believe there should be some exclusions to the early release portions based on good time earned. And we’re still talking about it," Cornyn said. "I don’t know if we have enough time to get this thing done. It’s going to take unanimous consent, and as I said at the outset, we don’t have much time.”
White House Deputy Press Secretary Hogan Gidley denied that an alternative version of the legislation is being circulated.
"The President has endorsed the Senate compromise on the First Step Act, and the White House is not circulating any other version. All reporting to the contrary is false. The White House is committed to passing this legislation in the lame duck," Gidley said in a statement.
Some supporters of the bill accused McConnell of letting the president hang out to dry after he came out in public support for the bill earlier this month.
"Today I'm thrilled to announce my support for this bipartisan bill that will make our communities safer, and give former inmates a second chance at life after they served their time," the president said in announcing his endorsement for the legislations from the White House in mid-November.
Should the bill not be considered during the lame duck session, it’s not clear how the bill will fare in a new Congress with new political factions, including a Senate that is more conservative and a House that will be more liberal, with a new set of legislative priorities likely to overshadow the criminal justice reform bill. And with the death of President George H.W. Bush over the weekend interrupting the normal course of Congressional business as the nation pauses to mourn, the timetable for getting this presidential priority accomplished has shrunk even further.
Copyright © 2018, ABC Radio. All rights reserved.