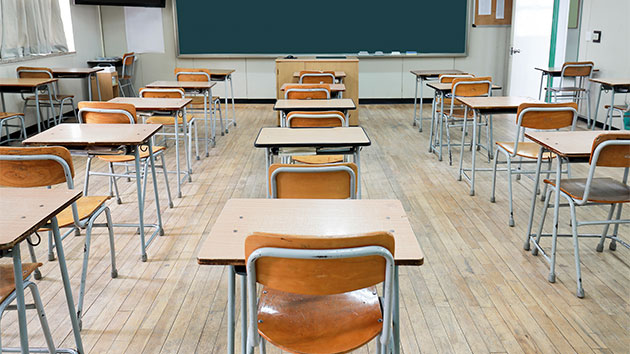 iStock/ DONGSEON_KIM(NEW YORK) — A class assignment went awry after high school students in New Hampshire ended up re-writing "Jingle Bells" to be a racist tune as part of an assignment about the Reconstruction period.
An investigation is now underway after video of the 11th graders singing their Ku Klux Klan-themed version of the song surfaced online.
Dover High School superintendent Bill Harbron confirmed to ABC News that the song included the lines “KKK, KKK, Let’s kill all the blacks” and “White masks on our heads, blood beneath our feet, laughing till they’re dead — ha, ha, ha.”
“My own personal reaction was one of disbelief, that at some point that the teacher did not stop it and say ‘Let’s talk about this,’” Harbron told ABC News.
Harbron said the veteran teacher, John Carver, has been put on administrative leave with pay. Carver did not immediately respond to ABC News' requests for comment.
The incident took place in a U.S. history class last Friday as part of an assignment about the post-Civil War period.
“The teacher was not aware – nor were the students – that it was being videotaped by another student,” Harbron said. He noted that the video was subsequently posted on social media over the weekend.
The video is about a minute long and shows two students singing the song while others laughed, though Harbron said that “laughing sometimes means ‘I’m not comfortable with it.’”
No actions have been taken against any students so far.
“We’re still trying to understand what occurred,” he said.
“I think it was a great opportunity to sit down and have a conversation about what was occurring at this point in history and why was it appropriate then and why is it definitely not appropriate now,” Harbron said.
Harbron on Monday wrote a letter to the community and posted it on the Dover High School Facebook page, saying that school officials are working to "investigate and address an incident of extreme racial insensitivity."

"While the incident was part of a classroom assignment dealing with reconstruction period in American history, the impact was harmful," the letter said. "We are deeply concerned that an event such as this could occur and understand the emotion and concern that this event will create for our students, families and staff."