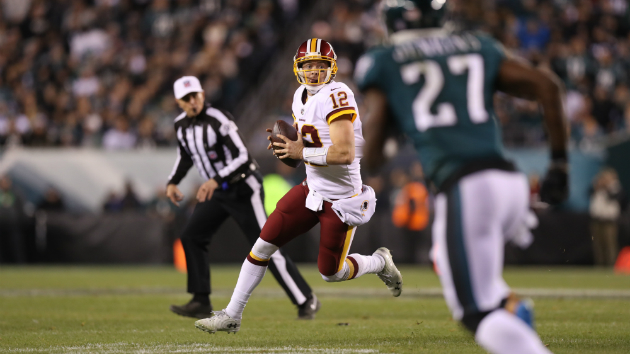 Allen Kee / ESPN Images(PHILADELPHIA) — The Washington Redskins are down yet another quarterback.
Colt McCoy broke his right fibula in Monday night's game against the Philadelphia Eagles. The injury happened in the first quarter of the game, which the Redskins ended up losing 28-13.
McCoy is now out for the season, after just two starts. He stepped in to start for Washington after the team's starting quarterback, Alex Smith, suffered a similar fate two weeks ago. Smith was sacked on Nov. 18 against the Houston Texans, breaking the fibula and tibia in his right leg.
Mark Sanchez, who the Redskins signed on Nov. 19, replaced McCoy on the field Monday night and will now lead the team as they fight for a chance to make it to the playoffs. Washington is currently tied with the Eagles for second place in the NFC East.