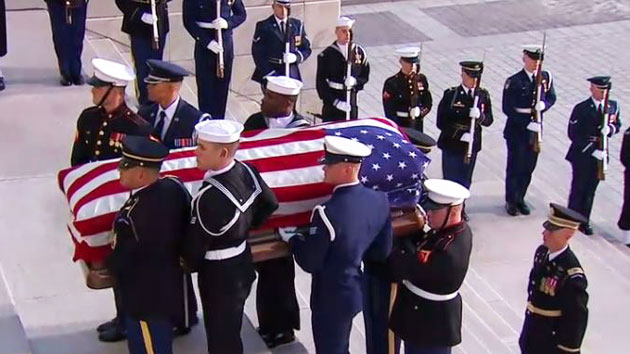 ABC News(WASHINGTON) — President Trump and first lady Melania Trump on Tuesday will offer their condolences to the “wonderful” Bush family during a private visit to the Blair House on Tuesday, the president announced by tweet.
The president also said that Melania Trump will be giving former first lady Laura Bush a tour of the White House Christmas decorations Tuesday.
At the invitation of the Trump White House, former President George W. Bush and his close family are staying at the presidential guest house while in Washington for the official state events surrounding the late President George H.W. Bush’s funeral.
Trump's visit with the Bush family on Tuesday will be the first public interaction between Trump and the Bush family since his inauguration.
"The elegance & precision of the last two days have been remarkable!" President Trump writes in his tweet, complimenting the official proceedings which have been closely planned between the Bush team and Trump White House.
The president and first lady made a trip to the U.S. Capitol Monday night to pay their respects to former President George H.W. Bush, who is lying in state in the Capitol Rotunda ahead of the state funeral Wednesday. The Trumps will attend but he is not scheduled to speak.
A person familiar with the arrangements said the Bush team and Trump White House have been in close contact in planning an eventual funeral for the elder President Bush for months, marking a departure from what has been a long-running feud between President Trump and the Bush family.
During the 2016 campaign, then-candidate Trump mocked former primary rival Jeb Bush as "low energy" and has also been fiercely critical of former President George W. Bush, even once describing him as the "worst" president in U.S. history.
Copyright © 2018, ABC Radio. All rights reserved.