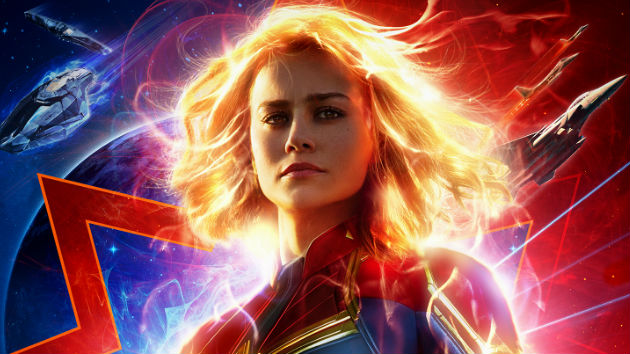 Marvel Studios(LOS ANGELES) — Monday Night Football likely had lots of new viewers Monday night, as Marvel Studios dropped a new trailer to its upcoming Captain Marvel during halftime of the game between the Washington Redskins and Philadelphia Eagles on ESPN.

The trailer was also posted online, for those who weren't willing to wade through all the sports to get to the comic book-based action.

The second trailer fleshes out more of the 1990s-set movie's plot. Oscar winner Brie Larson plays the titular heroine — who was once Carol Danvers, an Air Force fighter pilot.

An accident infuses her with alien superpowers — indeed, her Captain Marvel is just about the most powerful character in the Marvel Comics universe — but the incident wipes away her past life.

"Your life began the day it nearly ended. We found you with no memory," Annette Bening's character says. "We made you one of us."

"Us," is a Kree — an alien "race of noble warrior heroes," as Danvers explains to Samuel L. Jackson's Nick Fury after she returns to Earth. There, she explains to him about the intergalactic war between the Kree and the shape-shifting Skrulls, which leaves Earth stuck in the middle.

Danvers is haunted by flashes of her past life on earth, and a sense of duty to protect the planet.

Larson's Captain Marvel is the first female character to front her own movie in the Marvel Cinematic Universe. As teased during the post-credits scene of Avengers: Infinity War, she's could be the only hope humanity has after Thanos' finger-snap wipes out half of all living things in the universe.

Marvel Studios releases hour-long version of Daniel Brühl dancing after #ReleaseTheZemoCut trends
See Amy Adams and an all-star cast in creepy new trailer for ‘The Woman in the Window’
Check out the trailer to the animated ‘Batman: The Long Halloween’
“It happens a lot”: Marvel fans feed Sebastian Stan the code words to “activate” his ‘Winter Soldier’ character
Watch the trailer for ‘Monster’ from executive producers John Legend, Nas, and Jeffrey Wright
“I’m done running from my past” — New trailer released for ‘Black Widow’