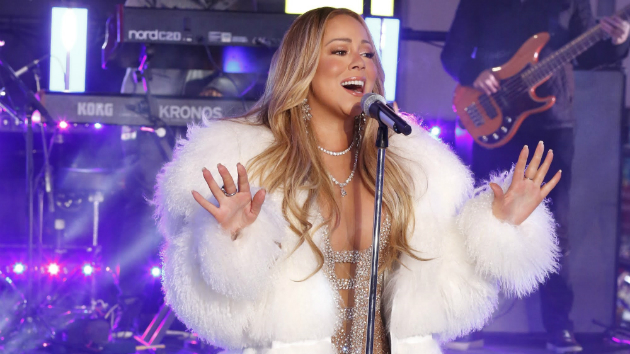 ABC/Heidi Gutman(NEW YORK) — Looking to build your playlist of the most popular holiday songs? You'd better put Mariah Carey at the top. The pop diva's "All I Want for Christmas Is You" is one of the most-played songs this time of year.

In fact, the song tops the 2018 list of the Top 25 Holiday Songs compiled by the American Society of Composers, Authors and Publishers (ASCAP), marking the second year in a row that it's landed at #1 on the tally.

"From the very beginning, Mariah and I wanted to create music that would make listeners feel the same sense of nostalgia we all feel around the holiday season," co-writer and producer Walter Afanasieff says of "All I Want for Christmas Is You." "And what started as a simple rock and roll melody on the piano, I'm so pleased to say has topped this list once again and become a holiday classic."

Holiday tunes by other famous veteran pop and rock artists that also made the list include George Michael's "Last Christmas" at #7, Jose Feliciano's "Feliz Navidad" at #17 and Paul McCartney's "Wonderful Christmastime" at #25.

In addition, the star-studded 1984 U.K. charity single "Do They Know It's Christmas?" took the #24 spot. The track features vocals by more than 20 artists, including George Michael, Bono, Sting, Phil Collins, Boy George, Simon LeBon and Bananarama.

Here's the list of ASCAP's Top 25 Holiday Songs for 2018, along with who wrote them and when: