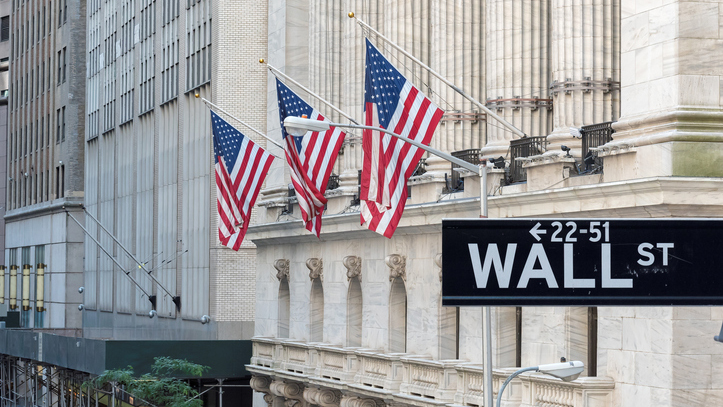 lucky-photographer/iStock(NEW YORK) — The Dow Jones Industrial Average plunged on Tuesday amid fears of an economic downturn, led by disappointing bank earnings and unresolved trade issues between the U.S. and China.
The Dow closed 799 points or 3.1 percent lower at 25,027. Shares of major U.S. banks also took a dive with Citigroup, Morgan Stanley and Capital One bottoming out at 52-week lows. Toll Brothers also gave weaker-than-expected guidance for 2019, citing a slowing housing market.
The uncertainty over the global economy weighed down all of the indices. The tech-heavy NASDAQ ended the day 3.8 percent or 283 points lower at 7,158. The S&P 500 index closed at 2,700, down 90 points or 3.24 percent.
“Violent volatility resumed as tumbling bond yields, a flattening yield curve and lingering questions about the G20 US-China trade truce combined to stoke increasing recession fears. While US growth is still holding up OK, worries are increasing about the overseas economic outlook. All this macro-economic uncertainty is clouding the 2019 earnings outlook, leading to increasingly violent equity swings as investors try to handicap what 2019 will look like," Alec Young, managing director of Global Markets Research, FTSE Russell, told ABC News.
"Cyclical sectors like technology, financials and industrials led markets lower, while defensive areas like utilities and real estate weathered the storm best. Until confidence in the global economy improves and bond yields stabilize, market psychology is likely to remain fragile," Young added.
On Tuesday, President Trump has declared himself a "Tariff Man" in tweeting about the state of progress with China, doubling down the threat to raise tariffs on Chinese goods if a deal isn't solidified.
Over the weekend, Trump had boasted that he had reached a deal with China's President Xi Jinping, although details remained unclear into late Tuesday. Senior administration officials also had trouble articulating any specifics about the deal in press briefings.
The president tweeted optimistically about the chances for a deal with China, writing "President Xi and I want this deal to happen, and it probably will." But if a deal doesn't happen, he reminds his followers, "I am a Tariff Man."
"MAKE AMERICA RICH AGAIN," Trump tweeted.
However, traders across the board seemed to doubt progress on the trade talks with China.
"People think there is not 'substance' behind Trumps tweets about tariffs so the markets are giving back the gains from before the G20 meeting," Michael Matousek, head trader at U.S. Global Investors, told ABC News.

Pediatricians with kids speak out about delta surge fears
Addressing vaccine fears as Latinos fall behind in COVID-19 vaccinations
Director Jason Reitman dives deep into ‘Ghostbusters: Afterlife’ trailer as new round of toys appear
Americans’ optimism about country’s direction over next year drops nearly 20 points since May: POLL
Dow sinks more than 800 points as delta variant stokes new fears for economic recovery
Biden pushes back on inflation fears ahead of infrastructure plan vote