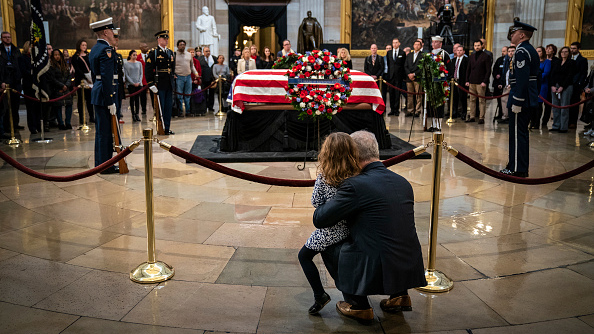 Drew Angerer/Getty Images(WASHINGTON) — As a military honor guard stood silent watch, thousands reverently filed through the U.S. Capitol Rotunda Tuesday to pay respects to former President George H.W. Bush as he lay in state ahead of his state funeral Wednesday morning.
Since Monday evening and all through the night — with only the sounds of footsteps echoing in the historic chamber — Americans from all walks of life have come to honor the nation's 41st president, from parents with young children to the former top commanders of Operation Desert Storm — the Bush-led liberation of Kuwait from Saddam Hussein's Iraq.
In between citizens who paused to gaze, some in tears, at the former president’s flag-draped casket, dignitaries and former government leaders also paid somber tribute.
Retired Gen. Colin Powell, who served as Bush’s chairman of the Joint Chiefs of Staff during the first Gulf War, joined a group of his fellow military leaders saluting their former commander-in-chief.
Shortly afterward, Sully, Bush’s service dog during his final months in a wheelchair, was brought in to say a final goodbye, sitting quietly in front of the casket before being led out to eventually begin his new mission serving wounded troops at Walter Reed National Military Medical Center. The golden lab appeared symbolically with beneficiaries of the Americans with Disabilities Act, one of the most enduring pieces of legislation signed by the late president.
Current CIA director Gina Haspel also made a symbolic visit to the Rotunda with former CIA directors, including John Brennan, just hours before she would go to Capitol Hill to brief senators on the killing of journalist Jamal Khashoggi as they weigh their next steps in possibly punishing Saudi Arabia over the slaying.
President Trump and first lady Melania Trump came to the Rotunda to pay their respects Monday evening. The president saluted the casket as his wife looked on.
As the nation mourns the former president — from his Washington funeral to his burial in Houston in this week of tributes — here is what you need to know about the memorials ahead:
Tuesday
Before George H.W. Bush’s body is laid to rest at his presidential library and museum at Texas A&M University in College Station on Thursday, the former president’s casket will remain on view at the Capitol Rotunda until 7 a.m. Wednesday morning.
Bush’s personal U.S. Secret Service detail, whose members who grew close to Bush over the years, were expected to visit the Capitol Rotunda.
Wednesday
On Wednesday at 10 a.m., a departure ceremony from the Capitol to the National Cathedral in Washington, D.C., begins.
The Bush funeral procession includes the country’s highest honor, a 21-gun salute made with cannons positioned at Truman Park.
The ceremony will start with a presentation of arms and the playing of “Hail to the Chief.” The casket of the president, one of the last of the World War II generation and who helped steer the U.S. when the Cold War ended, will then be placed in a hearse to proceed to Washington National Cathedral.
During the state funeral, former President George W. Bush, Mr. Bush’s son, will deliver a eulogy, along with former Canadian Prime Minister Brian Mulroney, former Wyoming GOP Sen. Alan Simpson, and historian Jon Meacham. Foreign leaders from around the world are expected to attend the service, including Britain's Prince Charles and German Chancellor Angela Merkel.
Despite his past feud with the Bush Family, President Trump has announced that he will attend the funeral with first lady Melania Trump. But breaking with recent tradition, Trump is not slated to deliver a eulogy. All of the other living former presidents — Jimmy Carter, Bill Clinton, and Barack Obama — are also expected to attend the funeral.
Following the state funeral, Bush's casket will be taken to Joint Base Andrews and flown back to Texas, where the Bush family will participate in an arrival ceremony at Ellington Field in Houston.
Mr. Bush’s casket will be then be brought to St. Martin’s Episcopal Church in Houston, Texas, where Bush will lie in repose until Thursday.
Thursday
A funeral service will be held at St. Martin’s at 11 a.m., after which the former president will be taken by train to the George HW Bush Presidential Library at Texas A&M University.
The 41st president’s final resting place will be next to his wife of 73 years, Barbara.
A spokesman for the former president tweeted that Bush, known for often wearing quirky socks and his playful sense of humor, will be buried in socks that pay tribute to his time as a naval aviator in World War II and his lifetime of public service.