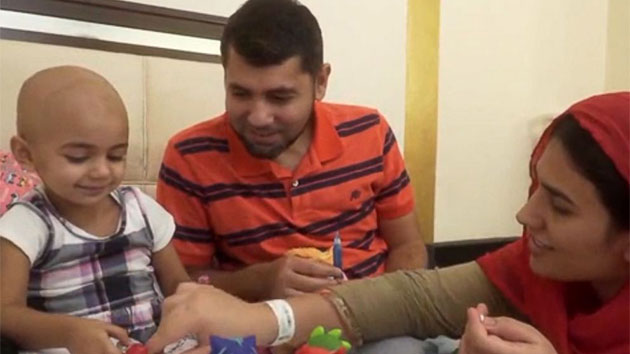 OneBlood.org(NEW YORK) — The family of a 2-year-old girl battling an aggressive form of cancer is desperately searching for a rare blood type that will allow her to obtain the life-saving treatment she needs.
Zainab Mughal was diagnosed with neuroblastoma two months ago. But her family believes the tumor in her stomach had been growing for at least 10 months before that, her father, Raheel Mughal, said in a video published by OneBlood, the organization aiding the family's search for Zainab's blood supply.
Mughal said his daughter's diagnosis was "the worst thing" they could have expected, until doctors discovered another problem.
Zainab's red blood cells are missing a common antigen known as Indian-B, said Susan Forbes, vice president of marketing and communications for OneBlood. Because the antigen is so common, it makes it difficult to find blood donors who are lacking it as well, Forbes said.
The blood is even harder to find because the donors must have blood types "O" or "A" and be 100 percent of Indian, Iranian or Pakistani descent, Forbes said.
Less than four percent of the world's population has the blood type Zainab needs to undergo treatment, which includes frequent blood transfusions, Forbes said. None of Zainab's family have turned out to be matches, Mughal said.
So far, OneBlood has located three matches, including one in the United Kingdom near London, with the help of the American Rare Donor Program, Forbes said. All three have since sent units of blood to the Miami area, where the family lives, Forbes said.
Zainab will need up to seven more people to donate throughout the course of her treatment, according to the organization. And more than 1,000 people who are of Iranian, Indian or Pakistani descent have donated blood to be tested, Forbes said.
"We will definitely need more blood," Mughal said. "My daughter, she’s still a long way from being perfect."
While the blood won't cure Zainab's cancer, it will allow her to undergo two bone marrow transplants, which will make her stronger and allow doctors to give her higher doses of chemotherapy, Forbes said.
The toddler is already undergoing regular chemotherapy, which has helped the tumor shrink, but "she still has a long road ahead of her," Forbes said.
"My daughter's life very much depends on the blood," Mughal said, describing the plea for help as a "humble request" from his heart.
Copyright © 2018, ABC Radio. All rights reserved.