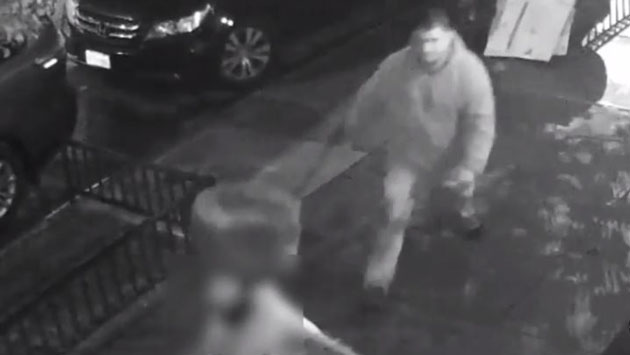 WABC(NEW YORK) — Police are searching for a suspect who punched an Orthodox Jewish man in New York City just two days before the start of Hanukkah.
The incident occurred Friday about 6:40 p.m. in Brooklyn's Williamsburg section, according to the NYPD. Surveillance video shows a man sneaking up behind the victim and punching him.
ABC station WABC is reporting that the victim is a 33-year-old man, but he has not been publicly released.
The victim appeared to be wearing a shtreimel, which is a fur hat commonly worn by some Hasidic Jewish men.
The NYPD describes the suspect as being between 30 and 35 years old, standing about 5-feet-10-inches tall and weighing 250 pounds.
The investigation started as an assault investigation and now the department's Hate Crimes Task Force is investigating it is a bias crime.
The Anti-Defamation League is also offering a $5,000 reward for information leading to the arrest and conviction of the suspect or suspects involved in that attack, as well as another alleged assault the next morning.
The police have not connected the two alleged incidents.
ADL regional director Evan Bernstein said the organization is "increasingly concerned" about recent incidents, including a "number of alleged unprovoked assaults on Orthodox Jewish individuals in Brooklyn in recent weeks."
"Our Orthodox communities are particularly vulnerable, and Jewish communities are feeling increasingly afraid," Bernstein said in a statement.
There have been other reported incidents both elsewhere in New York and across the country.
On Nov. 28, a Columbia University professor found her office vandalized with swastikas and anti-Semitic words.
And on Nov. 29, an African-American mural in Los Angeles was also reportedly vandalized with swastikas.
The late October shooting in a Pittsburgh synagogue in which 11 people were killed was believed to be the deadliest attack on Jews in the United States.
"We know that hate is affecting many communities, and we must stand strong and send a unified message to combat it at all levels," Bernstein said.

$1,500 worth of damage caused to stair handrail in Elk County
Anti-Asian hate bill could muster bipartisan support on Senate floor
Clearfield Police: mother mixes infant’s formula with vodka, woman fired but shows up for work
Officer killed in attack lies in honor in Capitol Rotunda
Hate crimes are hard to prosecute, but why?
Officer killed in attack to lie in honor in Capitol Rotunda