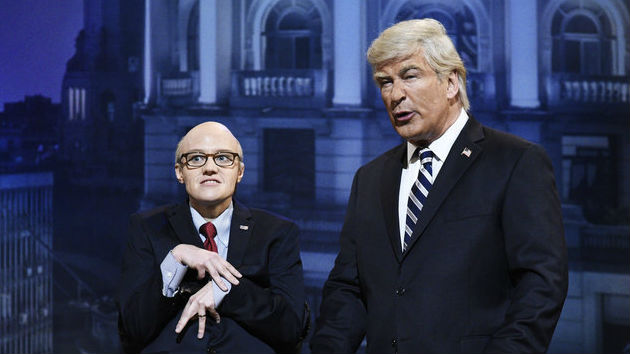 NBC/Will Heath(NEW YORK) — Alec Baldwin was back on Saturday Night Live this weekend, reprising his President Donald Trump impersonation for the cold open, in which Trump frets his ongoing trip to Argentina for the G-20 summit.

"I keep having a nightmare where I'm walking through a forest of blood," Baldwin’s Trump tells his wife Melania – played by SNL’s Cecily Strong.

"That was just my Christmas decorations," Melania responded, referring to the now-infamous red Christmas trees adorning the White House.

Trump then reached out to a host of friends, hoping to take his mind off all the problems surrounding his administration, including lawyer Rudy Giuliani — played by Kate McKinnon. Giuliani answered questions about the Robert Mueller probe, saying, "Well, I'm involved, so it's not great."

“God, I want to fire you Rudy, but I can’t – you know all my secrets," says the faux president.

"I keep those secrets where no one can find them — on nationally televised interviews," the faux Giuliani responds.

Trump then phones ex-lawyer Michael Cohen, a role reprised by Ben Stiller, who answers with, "Michael Cohen speaking, I'll tell you anything you want." Cohen, of course, pleaded guilty to lying to Congress earlier this week.

"You were like a son to me,” says Trump to Cohen, who asks, “Then why'd you make me do so much illegal stuff?"

"Because you were like a son to me," Trump deadpanned.

The sketch ends with the group joining Baldwin for a parody of "Don't Cry for Me Argentina" from the Broadway hit Evita — apparently an actual favorite of Trump.

The song concludes, "It's just a witch hunt, and we're all witches."

Alec Baldwin to make first post-shooting appearance at NYC Awards Gala
Appeals court weighs whether Justice Department should substitute for Trump in defamation suit
Alec Baldwin on ‘Rust’ shooting: ‘Someone is ​responsible…but I know it’s not me’
Biden declines comment on report Trump tested positive for COVID days before debate
World AIDS Day: A time for remembrance, a time for hope
Alec Baldwin exclusive: “The trigger wasn’t pulled. I didn’t pull the trigger”