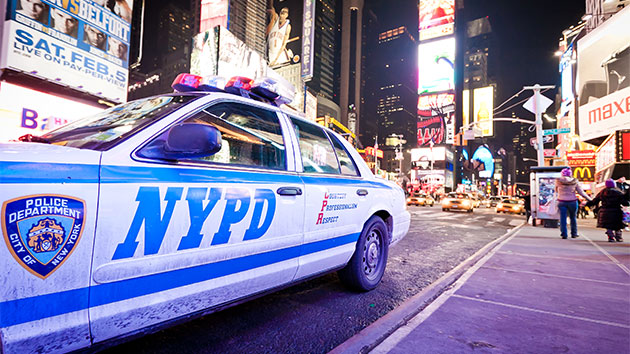 iStock/Getty(NEW YORK) — The international manhunt for a couple that got engaged in New York City — only to lose their diamond ring moments after the proposal when it fell down a sidewalk grate in Times Square — has come to an end.

The New York Police Department announced on Saturday that it had found the ring, and that it was searching for the couple.

It only took a day for the department to find the hapless duo.

"The couple have left the United States. We are making arrangements for them to get the ring back," NYPD Sergeant Jessica McRorie told ABC News.

"We would like to thank everyone who shared this story!" the NYPD wrote on Twitter. "The (now) happy couple is back in their home country, but thanks to your retweets they heard we were looking for them! We’re making arrangements to get them their ring back. Congratulations!"

We would like to thank everyone who shared this story! The (now) happy couple is back in their home country, but thanks to your retweets they heard we were looking for them! We’re making arrangements to get them their ring back. Congratulations! https://t.co/rXHxxkwClm

At a press conference in Times Square Sunday, NYPD officers said the couple immediately called police around midnight to report what happened to the ring. The police attempted to recover it, but were unable to because of dim lighting.

After a change of shift, different officers returned to the scene the following morning, and found the ring after 10 to 15 minutes of searching.

"There was a lot of muck and a lot of just typical stuff that you find in the sewer grate down there," said Officer Bucchignano. "It's like finding a needle in a haystack. We've been on plenty of these searches where we've come up with nothing, unfortunately. And fortunately, this one has a good ending to it."

After digging up the ring came the hard part — locating the couple with only surveillance video to work with. That's when the NYPD took to Twitter to help with the search.

The department tweeted the video of the couple showing them crouching on the ground and looking through a grate in the sidewalk.

They also posted a photo of the ring itself.

Here’s a photo of the ring our officers recovered (and cleaned!) Call 1-800-577-TIPS or DM @NYPDTips if you know the happy couple so we can return it to them! pic.twitter.com/hzFXxuMVJW

By Sunday, the couple got word that police were looking for them.

NYPD Commissioner James O'Neill, who made pleas on Twitter Sunday to help find the couple, celebrated after the search ended with a happy ending.

Found ‘em! Well done Twitterverse.
The relieved couple is back in their home country now, but @NYPDnews will be sure to get the ring to them quickly … and safely. Happy holidays, everyone.

The police tweeted a photo of the happy couple on Sunday, appearing to thank the police.
The officers who found the ring congratulated the couple on their engagement.

"If something seems as small as this for us, to them, that was the biggest thing that could have happened to them at that moment," said Officer Fulgieri, who spoke at the press conference. "It’s a good story, it’s a happy ending, we’re all happy to be a part of it."

COVID-19 fallout threat ‘will ripple through the world for years,’ new intel report finds
A Goodwill employee finds $42,000 in a pile of donations
Lost taste and smell from COVID-19? A new cookbook aims to help
Kevin Bacon hilariously reveals why he had to return wife Kyra Sedgwick’s engagement ring
New poll finds nearly half the country would vote for Dwayne Johnson if he ran for president
Couple in their 90s reunited after being separated for a year due to COVID-19