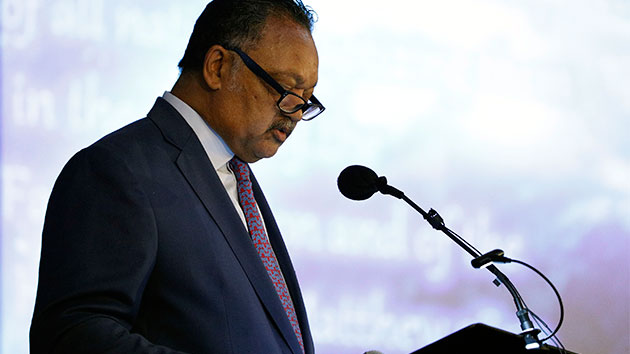 Bill Pugliano/Getty Images(WASHINGTON) — Renowned civil rights activist Rev. Jesse Jackson delivered a powerful eulogy on Saturday at the funeral of a 21-year-old black man who was shot to death by police inside an Alabama shopping mall on Thanksgiving night.

"Today, you find yourselves in the midst of a storm," Jackson told the crowd of mourners at the Boutwell Memorial Auditorium in Birmingham. "We must turn this tragedy into triumph in some kind of way."

Emantic Fitzgerald Bradford Jr., known as EJ, was shot and killed by police at Riverchase Galleria mall in the Birmingham suburb of Hoover on the evening of Nov. 22, following a physical altercation between multiple people. Bradford's family has called his death "unjust," claiming their son was just trying to help calm the chaos.

The incident began when another man, who police first suspected to be Bradford, pulled out a gun and shot and wounded an 18-year-old man. A 12-year-old girl, an innocent bystander, was also hit. Police later determined that Bradford, who was armed, did not fire his weapon in that altercation and that the suspect was still at large. The Bradford family's attorney, Benjamin Crump, said that Bradford was carrying a handgun but was licensed to do so.

On Thursday, authorities apprehended 20-year-old Erron Martez Dequan Brown in connection with the Nov. 22 shooting. He will be extradited from Georgia to Alabama to face charges, authorities said.

During the funeral Saturday, Jackson described the shooting as the "violent death of another innocent son wrapped in black skin," saying that Bradford joins a long list of "victims in this sickness of uncontrolled violence." The reverend named Trayvon Martin, an unarmed black teenager who was fatally shot by a neighborhood watchman in Florida in 2012, among those victims.

"His blood will not have been shed in vain," Jackson said. "The officer who took Emantic's life must face justice."

Jackson called for transparency, demanding authorities release any video evidence of the Nov. 22 shooting. The crowd joined him in repeating the words, "Show the tapes now!"

Mike McClure Jr., senior pastor of Rock City Church in Birmingham, who describes himself as the Bradford family’s pastor, led the homegoing service. At one point, he called for all the youth in the room to come up and place their hands on Bradford's casket and turn their lives over to God.

"This ain't right," McClure said repeatedly, while pointing at the casket. "Somebody's son is on this altar."

Bradford's mother, April Pipkins, was overcome with grief at the start of the service upon seeing her beloved son laying in the white casket. She was led out of the auditorium and later returned. Crump, the civil rights attorney who is representing the family, was seen at her side.

Several friends of Bradford's took turns coming up to the stage to speak about the kind of man he was, "a wonderful person" and "always somebody you can call on."

Bradford's father, Emantic Fitzgerald Bradford Sr., spoke at length about his son, recalling the memories they shared from the moment he was born.

"The years I had with him were 21 good years," Bradford Sr. said. "To this day, he always going to be my hero."

He became visibly emotional as he talked about the time his son took care of him when he was sick with cancer.

Looking out from the stage at the packed auditorium, he said he never knew his son had "touched so many lives."

"He's not gone," Bradford Sr. said. "In spirit, we're going to be together forever."

Bradford was scheduled to be buried after the service Saturday in Valhalla Cemetery in Birmingham, according to an online obituary.