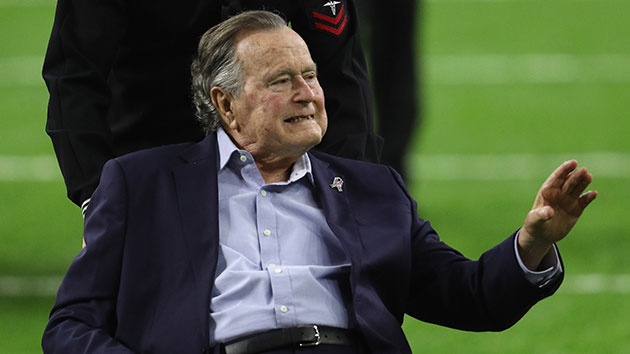 Patrick Smith/Getty Images(WASHINGTON) — The death of former President George H.W. Bush drew an immediate outpouring of condolences from around the country and the world.
His son, the 43rd president, sent an immediate statement on behalf of George H.W. Bush's children.
"Jeb, Neil, Marvin, Doro, and I are saddened to announce that after 94 remarkable years, our dear dad has died. George H.W. Bush was a man of the highest character and the best dad a son or daughter could ask for. The entire Bush family is deeply grateful for 41’s life and love, for the compassion of those who have cared and prayed for dad, and for the condolences of our friends and fellow citizens."
Donald and Melania Trump
"Melania and I join with a grieving Nation to mourn the loss of former President George H.W. Bush, who passed away last night.
"Through his essential authenticity, disarming wit, and unwavering commitment to faith, family, and country, President Bush inspired generations of his fellow Americans to public service — to be, in his words, 'a thousand points of light' illuminating the greatness, hope, and opportunity of America to the world."
Bill and Hillary Clinton
"Hillary and I mourn the passing of President George H.W. Bush, and give thanks for his great long life of service, love, and friendship.
"I will be forever grateful for the friendship we formed. From the moment I met him as a young governor invited to his home in Kennebunkport, I was struck by the kindness he showed to Chelsea, by his innate and genuine decency, and by his devotion to Barbara, his children, and their growing brood."
Barack Obama
"America has lost a patriot and humble servant in George Herbert Walker Bush. While our hearts are heavy today, they are also filled with gratitude. Not merely for the years he spent as our forty-first President, but for the more than 70 years he spent in devoted service to the country he loved — from a decorated Naval aviator who nearly gave his life in World War II, to Commander-in-Chief of our Armed Forces, with plenty of posts along the way."
Dan Quayle, Bush's vice president
"As so many Americans did, I had true affection for the man George Bush. He was a completely genuine, decent and honorable person. What’s more, he went into and out of the office as absolutely the same man. I think that exemplifies his character. I have often told my children, “If you want a role model in your life — look to President George Herbert Walker Bush." The world mourns the loss of a great American. But, it also celebrates a life well lived."
Jeb Bush Jr.
"Nothing gave my Gampy more joy than service to others, especially supporting and caring for those who risk making the ultimate sacrifice every day. His leadership taught us to be kinder and gentler, to love each other. We will miss him dearly."
George P. Bush
"My grandfather was the greatest man I ever knew. His life spanned the American Century—he fought in World War II … took part in the Texas oil boom … served out a distinguished career in public service including serving as president during the final days of the Cold War."

James A. Baker III, Bush's chief of staff and secretary of state
"The legacy of George H.W. Bush will be forever etched in the history of America and the world. It is a lifelong record of selfless patriotic service of our nation. He was the youngest Navy pilot in World War II, a Texas congressman, U.N. ambassador, America’s first envoy to China, CIA director, vice president and president. In each and every one of these positions, he led with strength, integrity, compassion and humility — characteristics that define a truly great man and effective leader."
Condoleezza Rice, George W. Bush's secretary of state
"President George Herbert Walker Bush was the epitome of a public servant. He loved America with all of his heart and served her as fully and completely as anyone ever has. I am so grateful that I had the opportunity to work for him, to learn from him and to experience his deep and abiding commitment to his fellow citizens. He was a mentor to me and a dear friend."
Theresa May, U.K. prime minister
"President George H.W. Bush’s ethos of public service was the guiding thread of his life and an example to us all. It took him from service in World War II, to his stewardship of the CIA and his direction of the Gulf War as Commander-in-Chief. And in navigating a peaceful end to the Cold War he made the world a safer place for generations to come.
"At each stage of his remarkable career, the President worked side by side with his friends, colleagues and counterparts in the United Kingdom. Today Britain remembers a great statesman and a true friend of our country. We send our deepest condolences to the American people and to the family he leaves behind."
Emmanuel Macron, French president
"On behalf of the French people, I convey all my condolences to the American nation for the loss of former President George Bush. He was a world leader, who strongly supported the alliance with Europe. Our sympathy to his family and beloved ones."
U.S. Naval Air Forces
"Naval Aviation mourns the passing of our 41st President, George H.W. Bush, a Naval Aviator, statesman, and humble public servant. His legacy lives on in those who don the cloth of our great nation and in the mighty warship which bears his name, @CVN77_GHWB. May he Rest In Peace."
Interior Secretary Ryan Zinke
"I am saddened to hear of the loss of President George H W Bush. He was a hero in battle and a champion of American values. A true patriot of the highest caliber. My thoughts and prayers with the Bush family. God bless."
Apple CEO Tim Cook
"We have lost a great American. Service defined President George H.W. Bush’s life, and he taught all of us about leadership, sacrifice and decency. We send our deepest sympathies to the Bush family."
President Richard Nixon’s daughters Tricia Nixon Cox and Julie Nixon Eisenhower
"Our father believed in George H.W. Bush. Richard Nixon kicked off George Bush’s campaign for Congress in 1966, encouraged him to run for Senate in 1970, entrusted him as his U.N. Ambassador and head of the RNC, and supported him tirelessly when he served as President for four years."
Sen. Ted Cruz, R-Texas
"Hearts are heavy as we bid farewell to President George H.W. Bush. He was a faithful servant to his country whose legacy of leadership & love of homeland became a family tradition, earned him the admiration of Americans & secured him a special place in the memory of every Texan. Over his storied career, President Bush was a war hero and a businessman, a legislator and an ambassador. His time as Vice President prepared him well for the heavy burdens of that highest office, steering our nation through the fall of the Berlin Wall and the First Gulf War. President Bush was the last of the Greatest Generation to sit in the Oval Office, but his resolve will not be lost to the past; it will triumph onward."
Al Gore, former vice president
"President George H.W. Bush served our nation with extraordinary integrity and grace. I will remember him for his personal kindness and for his love of this country. He earned bipartisan respect for speaking up and taking action for what he believed was right, even when doing so was unpopular. He inspired countless Americans to volunteer and improve their communities through his Points of Light Foundation. President Bush leaves behind an American legacy of a lifetime of service that will be revered for generations."
Rep. Sheila Jackson Lee, D-Texas
"A friend of the world, nation & all in Texas: #GeorgeHWBush was a #pointoflife until death & we'll miss him for his firm, determined leadership & his unceasing love for God, country and family – My deepest sympathies to his family – May he rest in peace."
Sen. Marco Rubio, R-Fla.
"President George H.W. Bush was an American hero, a patriot and a wise and generous man. May he Rest In Peace."
Rep. Steve Scalise, R-La.
"I am incredibly saddened to hear about the passing of President George H.W. Bush. President Bush dedicated his entire life to public service, including so many different roles in elected and appointed positions."
Dalai Lama
"I am saddened by the passing away of your father, President George H.W. Bush. I offer my profound condolences to you and your family at this difficult time. He was in fact the first American President that I was privileged to meet. I recall being deeply touched by your father’s concern for the Tibetan people and the situation in Tibet."
Sarah Palin
"What a life… full of love of family… strong faith… nothing’s more important. God bless the Bush family at this sad time."
Ellen DeGeneres
"I will never forget George H.W. Bush and President Clinton meeting me in my old hometown of New Orleans to show support and raise money after Hurricane Katrina. I send my love to his family tonight."
Copyright © 2018, ABC Radio. All rights reserved.