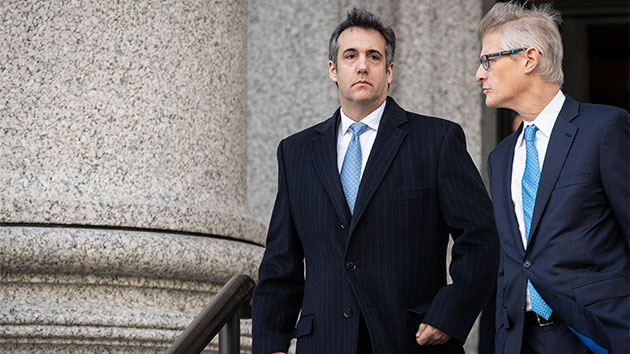 Drew Angerer/Getty Images(WASHINGTON) — One day after reaching a bombshell plea agreement with special counsel Robert Mueller, Michael Cohen, the president’s longtime personal attorney and fixer, asked a federal judge to spare him a prison sentence for crimes including campaign finance violations and lying to Congress.

In a personal, reflective sentencing memo filed late Friday night, attorneys for Cohen sought leniency from Judge William Pauley of New York’s Southern District, citing the “gargantuan cost” the case has already taken on him and his family.

“Truly the greatest punishment Michael has endured in the criminal process has been the shame and anxiety he feels daily from having subjected his family to the fallout from his case,” Cohen’s lawyers wrote.

Cohen pleaded guilty on Thursday to lying to Congress about the Russia investigation in a new deal with Mueller, who is probing Russian meddling during the 2016 presidential election.

Cohen admitted that he made the misstatements about the “Moscow Project” – the Trump Organization’s efforts to “pursue a branded property in Moscow” in an August 2017 letter to the House and Senate intelligence committees, which were conducting inquiries into alleged collusion and Russian interference, according to court documents.

He faces a possible sentence of up to five years in prison on the false statement charge and a potential $200,000 fine, but sentencing guidelines in the plea deal ranged from zero to six months. In his earlier plea deal with federal prosecutors in New York for two campaign finance violations and six counts related to his personal finances, the guidelines call for 46 to 63 months in prison and up to $1 million in fines.

Cohen is currently out on bail.

In the Friday night memo, Cohen’s attorneys wrote that “in the weeks during which his then-counsel prepared his written response to the Congressional Committees, Michael remained in close and regular contact with White-House based staff and legal counsel to [Trump,]” suggesting that Cohen’s testimony may have reflected a coordinated effort meant to protect Trump, though the memo stops short of making a direct allegation that Cohen was encouraged to lie.

Following Cohen's court appearance on Thursday morning, President Trump called his former ally "a weak person" who was lying about the proposed Moscow deal in hopes of getting a reduced sentence.

Attorneys for Cohen highlighted their client’s broad cooperation with Mueller and other federal investigators. Cohen is portrayed as having the “singular determination and personal conviction” to cooperate with the special counsel, even in the face of a "raw, full-bore attack by the most powerful person in the United States," — a reference to Trump.

In agreeing to cooperate with Mueller, “[Cohen] acted knowing that the result would be personal attacks on him by the President, a bevy of advisers and public relations specialists, and political supporters of the President, as well as threats to him,” his lawyers add. “He could have fought the government and continued to hold to the party line, positioning himself perhaps for a pardon or clemency.”

Cohen has sat for seven voluntary interviews with special counsel prosecutors since August – before his first guilty pleas – his lawyers noted. ABC News reported Thursday that those interviews accounted for more than 70 hours.

In addition to his cooperation with Mueller, Cohen has also assisted in the New York state attorney general’s investigation into the Trump Foundation, his lawyers revealed Friday, and has provided documents to the state attorney general in a separate, unidentified probe, too. He is also cooperating with federal investigators in the Southern District of New York in another ongoing case.

Cohen, who is scheduled for sentencing on December 12, is prepared to continue cooperating in those investigations even after his sentencing – an unusual legal strategy that carries tremendous risk for both Cohen and prosecutors. In a typical plea agreement that requires ongoing cooperation, sentencing is often set aside until the defendant’s cooperation is complete.

But Cohen declined to enter into a traditional agreement because he wanted to avoid a delay in his sentencing “as investigations and trials unfold and conclude,” his lawyers wrote Friday.

"This personal decision does not signal any intention on Michael's part to withhold information or his availability to respond to additional inquiry. To the contrary, he expects to cooperate further," the memo states.

Cohen’s split with President Trump, for whom he once claimed he “would take a bullet,” dates back to July, when Cohen told ABC News’ George Stephanopoulos that he was prepared to put his “family and country first.”

In Friday’s memo to Judge Pauley, attorneys for Cohen wrote that “Michael’s decision to cooperate and take full responsibility for his own conduct well reflects his personal resolve, notwithstanding past errors, to re-point his internal compass true north toward a productive, ethical and thoroughly law abiding life.”