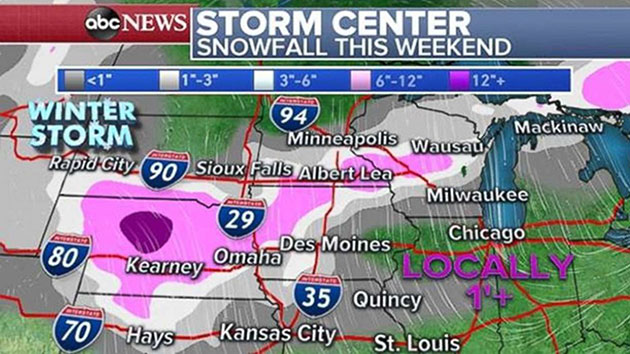 ABC News(NEW YORK) — A major storm developing in the central U.S. is bringing ongoing severe weather across the south, a flash flood threat to parts of the Gulf Coast and a major winter storm in the Northern Plains and upper Midwest.
There was one reported tornado in eastern Oklahoma overnight as several tornado warnings were issued in the eastern parts of the state. Additionally, there were nearly 60 reports of strong winds from northern Texas to southern Missouri. Numerous tornado warnings were issued during the overnight hours in southern Missouri, where winds reached 83 mph.
The U.S. averages 24 tornadoes in December, with most developing in the southern U.S.
A clear circulation was evident on radar and satellite imagery across Kansas on Saturday morning. This developing major storm will slowly move east during the day.
A tornado watch is in effect for parts of Missouri and Arkansas through the early Saturday morning hours as a line of strong storms moves through the region. A couple of tornadoes will be possible through the early morning hours in the watch area. The risk will diminish by mid-Saturday morning in this region.
Heavy rain has spread from eastern Kansas to Florida, and snow is beginning to develop across parts of Nebraska.
Travel conditions will become hazardous on Saturday morning with heavy snow developing in parts of Nebraska and South Dakota. Snowfall rates of 1 to 2 inches per hour are likely, with winds gusting to 35 mph in parts of the Northern Plains. This will cause near whiteout conditions.
Winter storm warnings and winter weather advisories are in effect for much of the northern U.S. from Montana to northern Iowa.
The severe weather threat will nudge eastward later in the day Saturday with two main areas of concern under a slight risk for severe weather: the Gulf states from Louisiana to Florida, including much of Alabama; and parts of eastern Missouri and much of Illinois. In these slight-risk areas, strong winds, brief tornadoes and hail will all be possible.
Additionally, an onslaught of heavy rain is expected for parts of the Florida Panhandle, extreme southern Georgia and Alabama. A flash flood watch has been issued for parts of this region, as locally 3 to 5 inches of rain is possible this weekend, with the bulk of it coming Saturday. This flood threat includes Panama City, Florida; and Dothan, Alabama.
Heavy snow will fall on Saturday through parts of the Midwest and Northern Plains with a significant impacts to roadways and possible flight delays at region airports.
As some of this precipitation moves into the Northeast late Saturday night, it will encounter some colder air. As a result, some precipitation may fall as a mix of snow, freezing rain and sleet in parts of the interior Northeast. However, up to 1 inch of snow and a one-tenth of an inch of ice is expected from parts of New York to Maine. This could cause dangerous travel overnight Saturday into early Sunday morning. As warmer air moves in from the south on Sunday morning, temperatures will change the precipitation to rain.
Borderline icy events can be extremely impactful on the roads.
On Sunday, the severe threat will slide toward the Southeast coast with a slight risk of severe weather from parts of Georgia to extreme southeast North Carolina. In the slight risk area, there is a possibility of strong winds, brief tornadoes and hail.
The greatest snow totals will be across parts of Nebraska, where locally over 1 foot of snow will fall. The combination of strong winds and heavy snow could cause some power outages in the region. Widespread snowfall totals of 6 to 12 inches are possible from Kansas to Wisconsin.
Copyright © 2018, ABC Radio. All rights reserved.