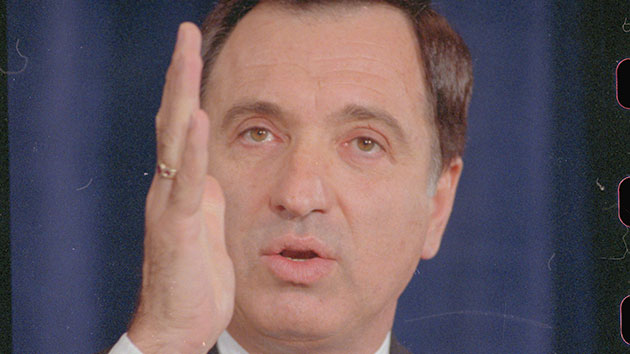 Bettmann/Getty Images(SAN FRANCISCO) — Nearly three decades ago, then-President George H.W. Bush was touring the San Francisco Bay Area and was "deeply moved" by what he saw.
A magnitude 6.9 earthquake on the evening of Oct. 17, 1989, had caused widespread damage. Some 12,000 homes and 2,600 businesses were damaged or destroyed in the San Francisco and Monterey Bay regions, leaving thousands of families displaced. Stretches of major highways and bridges collapsed, crushing cars and people below.
The quake's epicenter was located near Loma Prieta peak in the Santa Cruz mountains, about 9 miles northeast of Santa Cruz and 60 miles southeast of San Francisco. The massive seismic event caused an estimated $6 billion in property damage, according to the United States Geological Survey, which made it one of the most expensive natural disasters in American history at the time.
As many as 67 deaths and nearly 4,000 injuries were reported, though those figures were lower than anticipated because the quake struck during the 1989 World Series baseball championship between the Oakland Athletics and the San Francisco Giants, so the region's normally congested roadways had unusually light rush-hour traffic.
Bush arrived three days later to meet with local officials and view the hardest-hit areas, including Oakland, San Francisco and Santa Cruz.
"I'm deeply moved by this — deeply moved by it," the president told reporters at the scene of a fallen two-level freeway in Oakland. "Sad in some ways and yet a genuine appreciation for the way this community is pulling together, this state."
Art Agnos, who was the mayor of San Francisco at the time, said he'll never forget Bush's visit, describing him as a "true statesman."
"He was a president who cared about the entire country, and he showed it in the Loma Prieta earthquake in 1989 when he came here in a prompt fashion," Agnos told ABC San Francisco station KGO-TV in an interview Friday night.
A few days after his visit, Bush signed a $1.1 billion disaster relief package for the earthquake-ravaged state.
"He spent a lot of time here," Agnos said of the late president, "listening carefully to what we needed, and his administration was most responsive to us when we asked for the kind of help that would bring this city back."
Bush died at age 94 on Friday, his family announced in a statement.
He is survived by his five children, including former President George W. Bush and former Florida Gov. Jeb Bush.
Copyright © 2018, ABC Radio. All rights reserved.