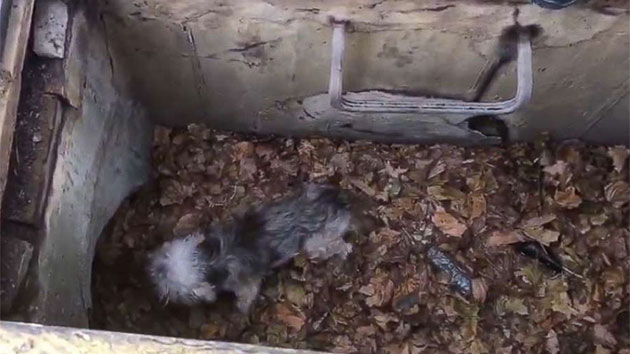 Haverstraw Police Dept./Facebook(NEW YORK) — A dog named Toto was lost for three days — but not with Dorothy in the Land of Oz.

This Toto was lost in a storm drain in Rockland County, New York.

But this story — just like classic "The Wizard of Oz" — seems to have had a happy ending.

Toto, who went missing Tuesday, was rescued Friday by police from the drain near his home in Haverstraw.

“He was my neighbor's dog, and my neighbor passed away, so I kept him,” she said.

But on Tuesday, Miller said a smoke alarm went off in her home and her niece opened the door. That's when Toto apparently walked out, she added.

“My niece was in the house, and when I came home I could not find him,” Miller said.

Miller, 81, said that after Toto went missing her niece posted on Facebook to try to find him. Her neighbors helped search the woods, but Toto was nowhere to be found, she added.

“I thought maybe he was in a ditch someplace, or he was in the woods and that he died,” Miller said. “I was praying that they would find him.”

On Friday, a woman in her neighborhood was walking near a storm drain near Miller’s home, and heard a dog barking, Miller said.

The woman then called the police, who responded to the drain, opened it and scooped Toto out.

Miller said Toto is shaken up, though.

She added that she took him to see a veterinarian, but Toto hasn't had an appetite since being rescued.

“I'm giving him a few days, you know, and see," Miller said. "He's not eating or anything. But I think it takes time, you know?”