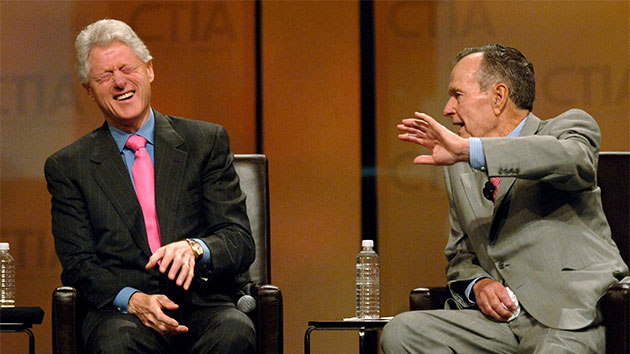 Joe Burbank/Orlando Sentinel/TNS via Getty Images(WASHINGTON) — It was a letter from a kindred spirit.

On Jan. 20, 1993, as newly inaugurated President Bill Clinton read outgoing President H.W. Bush's words — left for him inside a desk in the Oval Office — the burgeoning connection between the once-political rivals became inked on stationery beneath an embossed presidential seal.

"When I walked into this office just now, I felt the same sense of wonder and respect that I felt four years ago. I know you will feel that, too.

I wish you great happiness here.

I never felt the loneliness some presidents have described. There will be very tough times, made even more difficult by criticism you may not think is fair. I’m not a very good one to give advice, but just don’t let the critics discourage you or push you off course.

You will be our president when you read this note. I wish you well. I wish your family well.

Your success now is our country’s success. I am rooting hard for you.

For Clinton, who would go on to serve two terms in office, Bush's words spoke to both his generous spirit and his profound sense of patriotism. In 1992, Clinton defeated Bush in his re-election bid amid a weakened national economy and his own broken promise not to raise taxes.

"I love that letter," Clinton told ABC News historian Mark Updegrove just weeks before Bush died. "I thought it was vintage George Bush. I thought he meant it, but I also thought he was trying to be a citizen in the highest sense of the word. It was profoundly moving to me personally."

Despite what might have seemed like inauspicious beginnings, Bush and Clinton's friendship would span decades as the two men visited each other, worked together on the recovery of storm-ravaged areas and shared similar views on national education goals.

"His friendship has been one of the great gifts of my life," Clinton wrote in a column for the Washington Post on Saturday.

"From Indonesia to Houston, from the Katrina-ravaged Gulf Coast to Kennebunkport — where just a few months ago we shared our last visit, as he was surrounded by his family but clearly missing Barbara — I cherished every opportunity I had to learn and laugh with him. I just loved him."