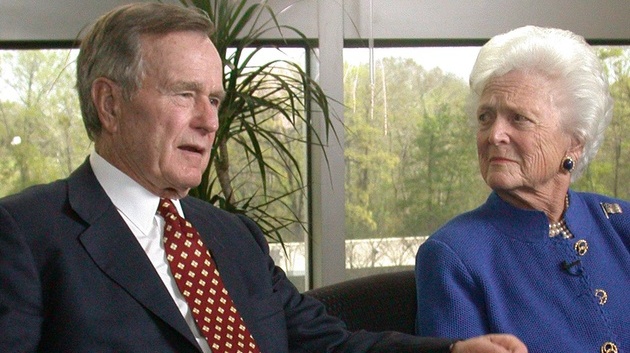 Ida Mae Astute /ABC via Getty ImagesBy COKIE ROBERTS, ABC News Political Analyst
(WASHINGTON) — Decency. That’s the first word that comes to mind when thinking of George H.W. Bush. He was a decent, self-effacing, funny, nice man. And he brought those traits to the presidency.

In a long interview I conducted with him as part of a series on former presidents reflecting on the Constitution, he said something like "I don't want to namedrop" at several points, when telling a story about visiting his own son in the White House. When recounting an anecdote about the fall of the Soviet Union, which he helped engineer, he would say, “I don’t want to brag.”
He took very much to heart his mother’s dictum to “be a good sport,” and not blame others for your own shortcomings. He said he thanked God for that motherly advice when he suffered defeat in 1992 because “it hurts to lose, it feels wonderful to win.”
It was tough for Bush to score many wins in his presidency as he faced a Congress run by a large and increasingly partisan Democratic majority. He did squeak out votes of approval to use the U.S. military to drive Saddam Hussein out of Kuwait and felt strongly that it would have been wrong to pursue the invader back to Baghdad.
Taking issue with the “Monday morning quarterbacks” who questioned that decision, he stated firmly, “I don’t believe in mission creep and I don’t believe in going back on your word to Congress and I don’t believe in going back on your word to the United Nations.”
Decency.
Bush disagreed often with members of Congress, but he never demonized them. Many were his friends. One of his best buddies was Bob Strauss, a fellow Texan, who served as Chairman of the Democratic National Committee, while Bush held the same role at the Republican National Committee.
It was during the Watergate scandal and Bush thought he deserved combat pay, “it was the worst job in the world.”
Strauss called him and told him that his position was like “making love to a gorilla,” the former president told me in the cleaned-up version.
“You can’t stop until the gorilla wants to.” The party chairman soon found himself faced with the dicey task of advising the Republican president to resign. It was the decent thing to do.
When the Soviet Union disintegrated, Bush appointed Strauss as the first ambassador to the new Russia though, as the Democrat told the president, he had never voted for him for anything. In those difficult years in the White House Bush knew there was one person who always had his back — his wife Barbara. When I said to him that first ladies are often unsung heroes he laughed, “She’s sung. And you know what the boys call her? The Enforcer, even the president calls her that.”
Reveling in the fact that his wife was “100 percent behind anything I did,” Bush did admit that he was reamed out for loudly declaring that he hated broccoli, though his stance “liberated every 4 year old.”
The affection that the Bushes felt for each other in their 73 year marriage heartened the nation when Mrs. Bush died but it was not just her affection that her husband appreciated, it was also her wisdom. Presidential wives “play a very influential role…they can make an enormous difference,” according to the husband of one First Lady and the father-in-law of another.
In his long career serving the country, President Bush came to know many of the people who chose his path. His view: “I believe public service is a noble calling and most members of Congress are honorable people.” He added, “I’ve found that most people serve for the right reasons.”
He certainly did, whether you agree or disagree with his policies, he served because he thought it was the right thing, the decent thing, for a dedicated American citizen to do.
Copyright © 2018, ABC Radio. All rights reserved.