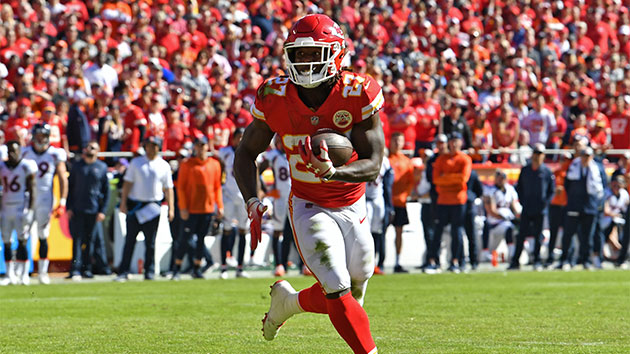 Peter G. Aiken/Getty Images(NEW YORK) — Kansas City Chiefs running back Kareem Hunt was sent home from the team facility Friday after video released by TMZ shows him shoving and kicking a woman during a February incident at a Cleveland hotel.

In the February 10 video, Hunt and the woman are seen yelling at each other, before being separated by several people. Hunt then pushes the woman, who hits him in the face.

Two men escort Hunt away from the woman. Hunt then charges out, colliding with the man, who knocks the woman over, before Hunt kicks the woman in the leg.

Cleveland Police were called to the hotel, but no arrests were made.

In August, Hunt addressed the reports of the February incident and one in which he was accused of punching a man. Hunt said he learned from the incidents, but was focused on football.

"Kareem is a young man, second year in the league, obviously had a very big year on the field last year," Clark Hunt said. "I'm sure he learned some lessons this offseason and hopefully won't be in those kind of situations in the future."

Hunt also said the he did not expect Hunt to be suspended by the league.