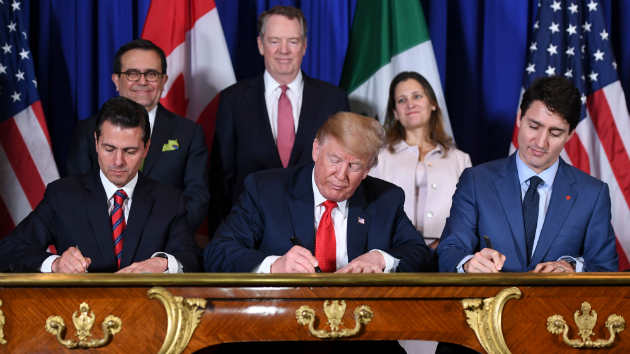 SAUL LOEB/AFP/Getty Images(BUENO AIRES, Argentina) — Appearing alongside Mexican President Enrique Pena Nieto and Canadian Prime Minister Justin Trudeau at the G-20 summit in Buenos Aires, Argentina, President Donald Trump hailed the ceremonial signing Friday of the new USMCA trade agreement and framed it as the conclusion of an at times contentious fight that has produced ‘great friendships’ for the three leaders.
“This has been a battle and battles sometimes make great friendships so it’s really terrific,” Trump said. “With our signatures today we will formally declare the intention of our three countries to replace NAFTA with the USMCA.”
“We have worked hard on this agreement,” Trump said. “It’s been long and hard and we have taken a lot of barbs and a little abuse and we got there, it’s great for all of our countries.”
Only briefly did Trump acknowledge that Congress still has yet to approve the new deal that has provided largely mixed reaction among U.S. lawmakers, though he predicted that he doesn’t expect there to be any major issues with securing the necessary support.
“I look forward to working with members of Congress and other USMCA partners and I have to say it has been so well reviewed I don't expect to have very much of a problem to ensure the complete implementation of our agreement,” Trump said.
At one point during his remarks, Trump took time to bid farewell to Pena Nieto and reached over to pat his arm as the crowd gave him a round of applause and cheers.
Trump called the USMCA "probably the largest trade deal in history" and said it was "an amazing deal for our farmers."
"The autoworkers are tremendous beneficiaries," Trump added.
While Trump did not mention General Motors' announcement on Tuesday that it would lay off 15 percent of its workers and close five plants in the U.S. and Canada, Trudeau did, calling it a "heavy blow."
"Donald, it's all the more reason why we need to keep working to remove the tariffs on steel and aluminum between our two countries," Trudeau said.