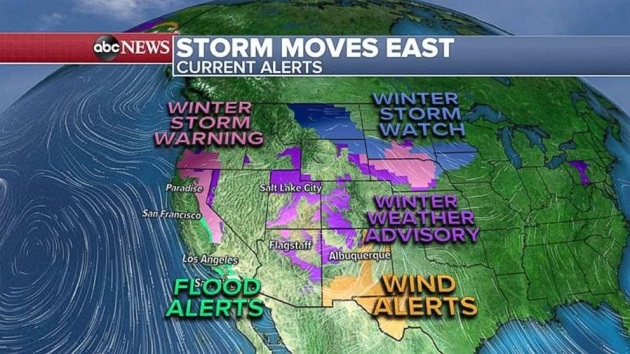 ABC News(NEW YORK) — Parts of central California got more than a foot of rain in recent days, including nearly 5 inches in Los Angeles County, as concerns continued over mudslides in recent wildfire regions.
In the Sierra Nevada Mountains up to 30 inches of snow fell.
The storm responsible for all the rain and snow in California is now moving into the Plains. With this storm, numerous flood, snow and wind alerts have been issued from California to Iowa.
As the storm moves east Friday, severe weather is possible from Dallas to Little Rock, Arkansas, and into the New Orleans area. The biggest threat will be huge hail, damaging winds and a few tornadoes.
By Saturday, the storm continues to move east, and the severe weather is expected in the Southeast and along the Gulf Coast from Mobile to Montgomery, Alabama, to Tallahassee, Florida, and north into central Georgia. Damaging winds, hail and a few tornadoes are possible.
As part of the same storm, heavy snow is expected over the next two days from the Rockies into the Plains and the Great Lakes. Some areas in the Plains could see near blizzard conditions on Saturday. Locally, a foot of snow is expected in the Plains.