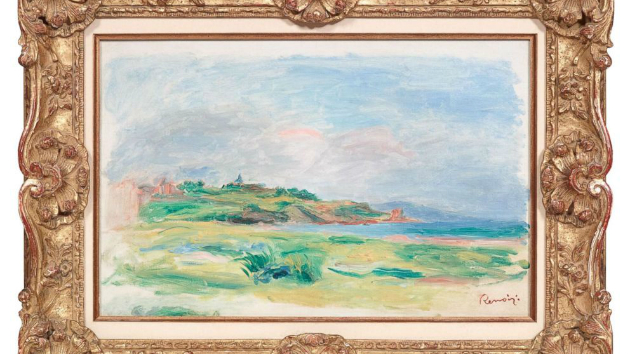 Dorotheum(VIENNA) — Three men stole a painting by French impressionist Pierre-Auguste Renoir worth an estimated $136,000 to $182,000 from an auction house in Vienna Monday, removing it from its frame, Vienna police said.
The men "were clearly professionals" and appeared to act in a coordinated manner when they nabbed the work of art from the Dorotheum auction house in the Austrian capital, authorities said.
“Everything happened realy [sic.] quick and fast," Vienna police spokesman Patrick Maierhofer told ABC News in an email Thursday. "They just took out the painitng [sic.] of the frame and walked out."
The painting they took, Maierhofer said, was a 1895 depiction of a landscape called “Golfe, mer, falaises verte."
Police released several surveillance images they said showed the three suspects. The men entered the auction house at 5:15 p.m., and grabbed the painting on the second floor before departing through different exits, police said in a statement.
A spokeswoman for Dorotheum, Doris Krumpl, said the auction house had no comment about the theft beyond the police report.
Maierhofer said that media attention had generated “calls with some hints," but no major developments. He added that investigators were working with international police organizations.
Copyright © 2018, ABC Radio. All rights reserved.