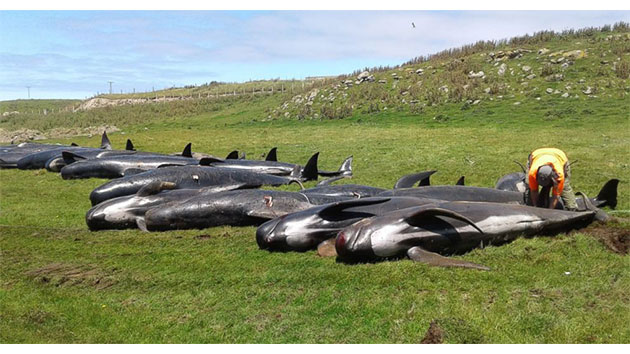 Department of Conservation
Posted on November 30, 2018 by ABC News

Department of Conservation(NEW YORK) — Fifty-one more pilot whales beached themselves and died in New Zealand, raising to nearly 200 the number that have done so over the past week.

The New Zealand Department of Conservation was called to Hanson Bay on the Chatham Islands after receiving an alert that 80 to 90 of the mammals had stranded themselves — about half were able to escape back to the sea.

One of 51 the beached whales that hadn't yet died when authorities arrived had to be euthanized.

"There was no likelihood of being able to successfully save the remaining whale," Department of Conservation Operations Manager Dave Carlton said in a statement. "It was the most humane thing to do."

Authorities, who have teamed up with locals to bury the whales on Hanson Bay, still don't know why this second group whales beached themselves. Skin and blubber samples have been sent to Massey University to learn more.

The latest incident comes after 145 pilot whales died on New Zealand's Stewart Island on Monday. In the north of the country, a 49-foot-long sperm whale died in Doubtful Bay last week.

"Large numbers of pilot whales have been stranding for as long as we know," Russell Leaper, a whale researcher at the International Fund for Animal Welfare, told ABC News. "It seems to be a species that is particularly susceptible to these mass stranding’s of live animals. It's still a bit of a mystery."

The Department of Conservation responds to an average of 85 stranding’s per year, but most involve only a single animal.

The largest recorded whale stranding in New Zealand was in 1918 on the Chatham Islands, when nearly 1,000 pilot whales came ashore, according to The Guardian.

"New Zealand seems to be a place prone to it," Leaper added. "They do have a lot of long, sandy beaches, but nevertheless they do seem to have a lot more of these mass stranding’s than we'd expect anywhere else."

‘No Time to Die’ tops the box office with less-than-expected $56 million
No Time to Stream: ﻿﻿Daniel Craig reveals why he’s excited ﻿’No Time To Die’ is exclusively in theaters
Rami Malek reveals how he prepped to play the bad guy in ‘No Time to Die’
The Mousetrap at Reitz Theater opens this Friday
‘No Time to Die’ becomes film with the widest UK release ever; is playing on the biggest screen in the world
Bard, James Bond: Daniel Craig following ‘No Time to Die’ with ‘Macbeth’ on Broadway opposite ‘Preacher”s Ruth Negga