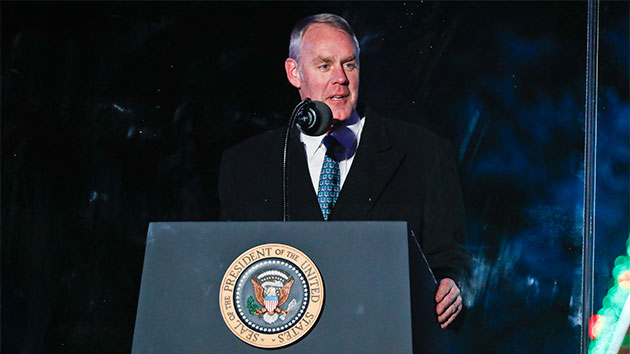 The claim is related to the fact that, in the 1980s, the lawmaker battled with alcohol addiction for which he sought treatment.

Zinke's tweet was a response to Rep. Raul Grijalva, the ranking Democrat on the House Natural Resources Committee, who wrote an op-ed published in USA Today on Friday calling for Interior Secretary Ryan Zinke to resign.

"I take no pleasure in calling for this step, and I have resisted it even as questions have grown about Mr. Zinke’s ethical and managerial failings. Unfortunately, his conduct in office and President Donald Trump’s neglect in setting ethical standards for his own cabinet have made it unavoidable," Grijalva wrote in the op-ed.

He went on to criticize Zinke's behavior as secretary and his policy positions, which Grijalva vocally opposes, and called for Zinke to resign, saying he offers no "credible leadership." Grijalva has said that if he takes over the Natural Resources Committee in January he plans to intensify oversight of the Interior Department, including Zinke or any future Interior secretary.

Zinke has faced multiple inquiries by his department's inspector general and congressional investigators since he took office, including into his travel and whether he was improperly involvement in a real estate development in his hometown. Zinke has maintained that he will be cleared in the investigations and has followed all department ethical rules.

An interim report into his travel found that the department allowed him to violate some rules, like letting his wife ride in official vehicles, but that it wasn't unusual and there was no wrongdoing.

The results of at least one investigation have been referred to the Department of Justice, but its unclear if that will result in any further action.

Zinke responded to Grijalva's op-ed Friday morning by alleging that the congressman has a drinking problem and calling for him to resign, saying "it's hard for him to think straight from the bottom of the bottle."

Grijalva shot back at Zinke, saying he is turning to personal attacks instead of responding to "credible and serious" allegations.

He also issued a statement in response to the tweet, saying "The American people know who I’m here to serve, and they know in whose interests I’m acting. They don’t know the same about Secretary Zinke.”

Several other House Democrats agreed, saying that Zinke's comments are out of line and do not address the ethical concerns in Grijalva's op-ed.

Personal attacks using official resources are unbecoming of a Cabinet member. Mean-spirited comments like @SecretaryZinke's are always wrong — and even more so when our country faces so many pressing challenges.

It would be nice if @SecretaryZinke had the same commitment to preserving #PublicLands as he did to abusing the power of his office for personal gain.
It would also be nice to have someone leading @Interior who had a shred of moral integrity.
Trump really knows how to pick em. https://t.co/fs3PbBiDba

The Republican leadership of the committee declined to comment to ABC News on the matter.

Zinke's tweet references reports that Grijalva gave a $48,000 settlement to a staffer that threatened to sue in 2015, saying he created a hostile work environment and was drunk at work.

Grijalva has previously said the allegations are not true and that the staffer only complained after she was fired. Details about the settlement are not publicly available and the congressman has said he wants to be released from a non-disclosure agreement to provide more information.

“Rep. Grijalva does not work while drunk and does not create a hostile workplace environment,” Adam Sarvana, Grijalva's spokesman, told ABC News in a written statement.

In 1985, Grijalva also admitted his drinking had gone beyond social drinking after he was arrested for driving under the influence while serving on the Tuscon school board, according to an article in the Arizona Republic. He spent 12 days in an alcohol-abuse program but has said more recently that he "beat the demons" he was dealing with at the time.

"It was a period of my life in which other things were affecting me and affecting me personally and once you wrestle the demons, and you beat 'em, you beat 'em. And I feel very comfortable that that demon's beat," he told Tuscon-based NBC affiliate KVOA earlier this year.

The Interior Department declined to comment further on Zinke's tweet, other than to say it speaks for itself.