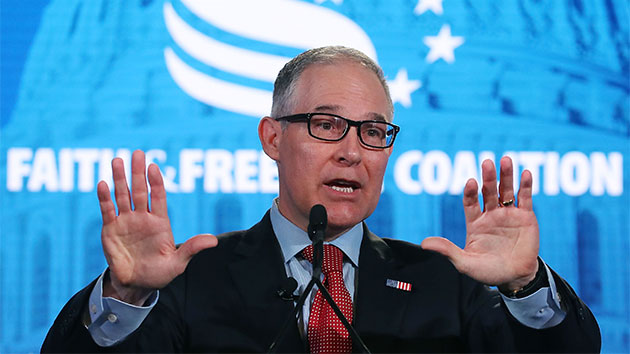 Mark Wilson/Getty Images(WASHINGTON) — The Environmental Protection Agency's inspector general informed Congress this week that it has dropped investigations into former administrator Scott Pruitt's deal to live in a lobbyist's Capitol Hill condo and alleged abuse of office, saying that Pruitt resigned before he could be interviewed by investigators.

The two investigations were demanded by outraged Democrats on the Hill who said Pruitt abused his position for personal benefit, including asking EPA employees to help him find housing and reportedly seek job opportunities for his wife. While the investigations continued after Pruitt resigned he was no longer required to cooperate.

A spokeswoman for the inspector general's office said they do not comment on closed cases and declined to answer whether Pruitt declined to be interviewed.

The inspector general's office also cleared appointee Samantha Dravis of allegations that she did not attend work for about three months, even though she was still being paid. Investigators said multiple witnesses and records show Dravis was working in the office and attending meetings during the time she allegedly wasn't working, so the allegations were unfounded.

In another investigation, the watchdog determined that ethics officials were not pressured to approve the controversial condo deal, even though they did say they were only informed of the details of the arrangement after Pruitt lived there for several months.

The results were announced in the inspector general's Semiannual Report to Congress, which details the offices work over the previous year. The EPA watchdog has published 52 reports in the 2018 fiscal year, including audits of Pruitt's security detail, failures that worsened the Flint water crisis, and the agency's management of asbestos in schools.