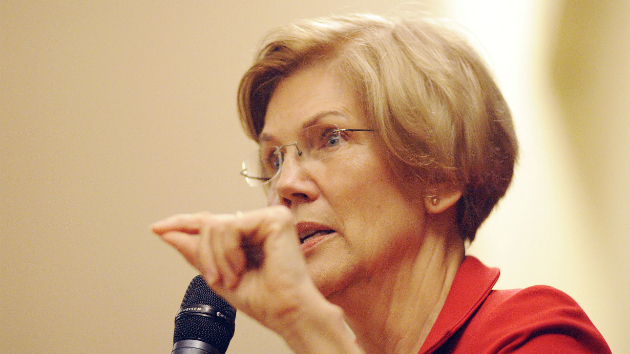 JOSEPH PREZIOSO/AFP/Getty Images(WASHINGTON) — Massachusetts Sen. Elizabeth Warren, a potential contender for the 2020 Democratic presidential nomination, outlined her vision for American foreign policy in a wide-ranging speech in Washington, D.C. on Thursday, decrying what she called "reckless, endless wars in the Middle East," and accusing President Donald Trump of embracing "dictators of all stripes."
Warren unleashed a lengthy line of attack against Trump's foreign policy, which she said too often capitulates to different despots.
"President Trump's actions and instincts align with those of authoritarian regimes around the globe. He embraces dictators of all stripes. He cozies up to white nationalists. He undermines the free press and incites violence against journalists," Warren said.
"He wraps himself in the flag and co-opts the military for partisan purposes — but he can't be bothered to visit our troops in harm’s way. And he is aided and abetted every step of the way by Republican politicians in Washington too pleased with his judicial appointments and tax cuts for the wealthy to stand up for fundamental American values," she continued.
Fresh off of her re-election to the U.S. Senate earlier this month, Warren also said the U.S. must re-examine its international economic policies if it wants to create a "foreign policy that works for all Americans, not just the rich and powerful."
"The globalization of trade has opened up opportunity and lifted billions out of poverty around the world. Giant corporations have made money hand over fist. But our trade and economic policies have not delivered the same kind of benefits for America's middle class," Warren told a crowd of students at American University.
"For decades, the leaders of both parties preached the gospel that free trade was a rising tide that would life all boats. Great rhetoric — expect that the trade deals they negotiated mainly lifted the yachts," she added.
The speech is yet another indication that Warren is gearing up for a presidential bid amid what is expected to be a crowded field of Democratic contenders who will be vying to deny Trump a second term in office.
Heavy on the theme of economic populism and the protection of American workers, Warren would likely have to compete with Vermont Sen. Bernie Sanders for voters aligned with the progressive wing of the Democratic Party, which in part helped to fuel a substantial victory in this year's midterm elections, which saw Democrats re-take the House by a sizable majority.
Neither Sanders nor Warren have made a public decision about a 2020 bid for the presidency.
During her speech, Warren also announced that she will be opposing the trade deal proposed by the Trump administration that restructures the North American Free Trade Agreement.
"Trump's deal won't stop the serious and ongoing harm NAFTA causes for American workers," Warren said.
"The President grabs headlines railing against [General Motors'] plans to axe thousands of American jobs in Ohio and Michigan — but his actual policies aren't stopping them or others like them from continuing to put corporate profits ahead of American workers. It's time for real change," she added, referencing the auto giant's recently announced plan to lay off 15 percent of its workers and shutter five plants in North America by the end of 2019.
The Massachusetts senator, first elected in 2012, also called for bringing American troops home from Afghanistan, and reigning in what she referred to as "our bloated defense budget."
"Rather than fighting in an Afghan civil war, let's help them reach a realistic peace settlement that halts the violence and protects our security," Warren said. "It's time to bring our troops home from Afghanistan, starting now."
Warren also raised alarm over recent aggressive activity from China and Russia, two nations she said are "working flat out to remake the global order to suit their own priorities."
"Both are working to undermine the basic human rights we hold dear. And if we cannot make our government work for all Americans, China and Russia will almost certainly succeed," she said.
In a question and answer session following her speech, Warren was asked about Russia's recent aggression towards Ukraine, including its seizure of Ukrainian navy boats and injuring sailors near Crimea.
"The President of the United States is being test right now in Ukraine, and he is failing," Warren said.
Warren and Trump sparred on social media last month after the Democrat released a DNA test revealing evidence of her Native American ancestry.
On Twitter, Trump revived his "Pocahantas" nickname for Warren, saying she took a "bogus DNA test."
Warren responded reminding the president of a promise he made at a July campaign rally to donate $1 million if Warren took a DNA test to prove her Native American ancestry.
“Millions of people watched you, @realDonaldTrump, as you fumbled and lied on your $1 million pledge,” Warren tweeted.
While she was not asked directly about a potential run for president, Warren made an unprompted prediction about what will happen in 2020.
"The world changed in 2016, it changed again in 2018, and I believe it will change again in 2020," Warren said to applause.