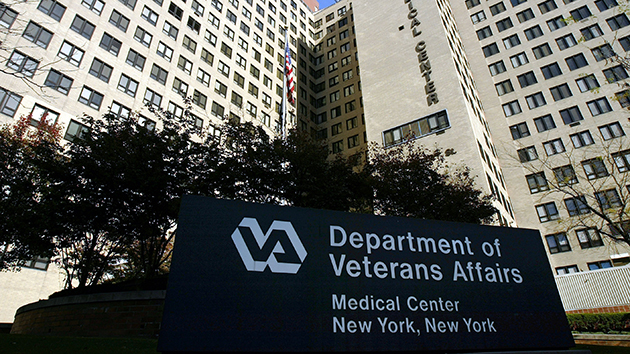 Photo by Spencer Platt/Getty Images(WASHINGTON) — Since a massive backlog of claims in August, thousands of student veterans across the nation have criticized and demanded answers for incorrect or delayed GI Bill benefit payments, which the Department of Veterans Affairs has blamed on inadequate training and technology issues.
On Thursday, officials from the Department of Veteran Affairs sought to correct conflicting reports that said the government agency would not issue retroactive payments to veterans who were found to have been underpaid.
Paul Lawrence, VA Undersecretary of Benefits, said at the top of a Capitol Hill hearing that over-payments can be “disregarded,” and underpayments would be adjusted. Those who were underpaid will “receive their checks in January,” Lawrence told House lawmakers.
This announcement conflicts with an NBC report published Wednesday saying VA officials reportedly told congressional staffers in a conference call that, to avoid an audit, it would not reimburse those veterans who were paid less than what they were owed.
"They are essentially going to ignore the law and say that that change only goes forward from December 2019," an aide told NBC News.
Lawrence opened his statements addressing the report by saying, "nothing could be further from the truth."
"Each and every veteran on the post-9/11 GI Bill will be made 100 percent whole — retroactively if need be — for their housing benefits for this academic year based on the current uncapped DoD rates, and, beginning in spring 2020, we will be in a position to provide veterans with the new rates where applicable to meet the law known as the Forever GI Bill.," Lawrence told lawmakers.
VA Secretary Robert Wilkie has since released a statement echoing Lawrence's sentiment.
An inspector general report came weeks after computer problems delayed GI Bill payments to thousands of veterans due to a change in calculating housing allowances under the Forever GI Bill, which President Trump signed into law last year. The department's computers were unable to process the change, leading to an enormous backlog of veterans' claims, according to NBC News.
The Forever GI Bill changed student housing allowances to reflect the ZIP codes where students attend the majority of their classes. This change was required to go into effect on Aug. 1, 2018, but the VA admits that its antiquated computer system was unable to simultaneously handle individual ZIP code changes and the influx of students registering for the fall semester.
Effective this Saturday, the Veterans Benefits Administration (VBA) will reset its system "to give the department the time, contracting support and resources necessary to develop the capability to process Spring 2020 enrollments in accordance with the law by December 1, 2019," the department said in a statement.
Officials said during the House Veterans’ Affairs Subcommittee hearing on Thursday that the system reset will allow for a change in training practices that focuses on computer competency. This is in an effort to avoid future claims from being incorrectly processed or delayed again.
Chairman Rep. Michael Bost (IL-12) made a point in saying that the watchdog reports estimated approximately 23,000 veterans received a delayed benefit effective date due to this backlog. The IG report also estimated the VA owes approximately 70 million dollars in underpayments to veterans for this academic year.
According to VA spokesman Curt Cashour, the VBA's pending education claims inventory is back to normal after being three times higher than normal in early September.
Copyright © 2018, ABC Radio. All rights reserved.