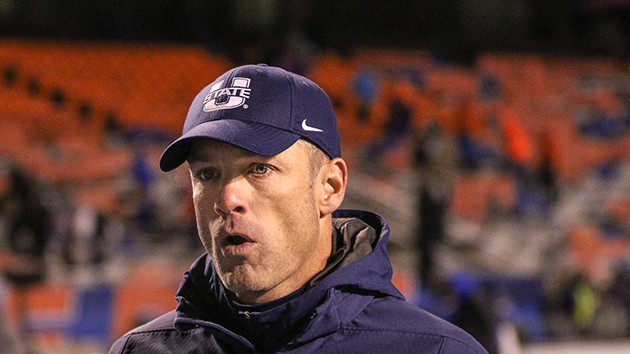 Photo by Loren Orr/Getty Images(COLLEGE STATION, Texas) — Just one day after he was named Mountain West coach of the year for his work at Utah State, Matt Wells has decided to leave the school to take the head football coaching job at Texas Tech.
Wells went 44-34 in six seasons at Utah State, including an impressive 10-2 campaign this year. The award was the second time Wells won that conference's coach of the year award.
Texas Tech announced the decision on Twitter Thursday night. ESPN reports Wells is expected to bring his offensive coordinator David Yost, and his defensive coordinator Keith Patterson, with him to Texas Tech.
Wells replaces Kliff Kingsbury, who was fired on Sunday at the end of a disappointing 5-7 season at Texas Tech.
Copyright © 2018, ABC Radio. All rights reserved.