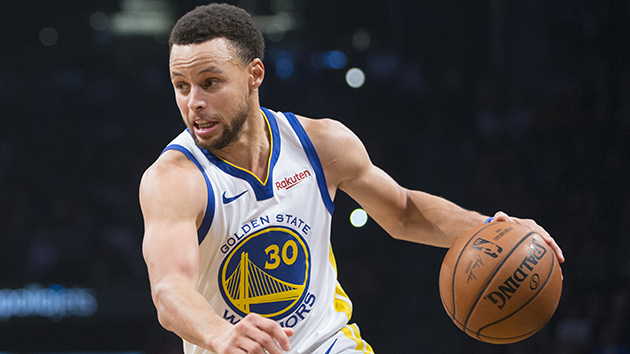 Photo by Anthony Causi / ESPN Images(NEW YORK) — Golden State Warriors star Stephen Curry is working to make his signature basketball shoes available to girls, in response to a letter from a nine-year-old Warriors fan.
In the letter, posted to Instagram by her father, Riley Morrison said she lives in Napa, California, who enjoys going to Warriors games with her dad. Ahead of her upcoming basketball season,Morrison said she and her father tried to purchase the Curry 5s on Under Armour's website, but were "disappointed to see that there were no Curry 5's for sale under the girls section."
Pointing out Curry's support of girls sports, and his two daughters, Morrison asked the two-time MVP to work with the apparel company to solve her problem.
Curry responded to Morrison Thursday morning, promising to send her a pair of the shoes, as well as making her one of the first to receive the upcoming Curry 6s. He also invited her to travel to Oakland in March to celebrate International Women's Day, saying there is "something special in the works."
Morrison spoke to Teen Vogue, which originally reported the story, saying that she "wanted to help make things equal for all girls, because girls play basketball too."
Copyright © 2018, ABC Radio. All rights reserved.