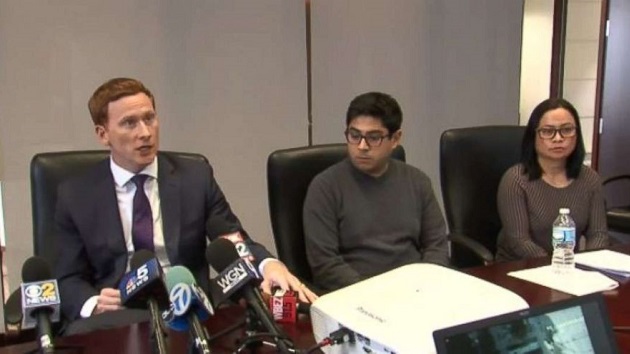 WLS-TV(CHICAGO) — Three months after their father was killed by a kick to the head in the middle of a Chicago street, Omar and Rehman Tungekar are still looking for justice.
Rehman and Omar Tungekar; the man's widow, Thara Tungekar; and the family's lawyer, Michael Gallagher, held a press conference on Wednesday and released new surveillance video of Anis Tungekar's death at the hands of an Uber driver on Labor Day weekend.
According to Gallagher, an Uber driver swiped taxi driver Anis Tungekar's cab and knocked off his side mirror before driving off. At the next intersection, the 64-year-old Anis Tungekar pulled in front of the Uber driver, exited the vehicle and yelled at him.
"Anis pulled his cab in front of the Uber driver, exited and verbally confronted him, pointing out the damage he had done to the cab," Gallagher said at the press conference.
The video shows Anis then walk to the passenger side and slam the folding mirror closed before walking back toward his cab. Gallagher called him "not aggressive in any way, shape or form."
"At that time the Uber driver got out of his car, walked to Anis and roundhouse kicked him, striking him in the head until he fell to the ground," said Gallagher.
Anis Tungekar was knocked out by one kick. He died two days later.
The 30-year-old driver, whose name has not been released by police, was questioned by police about the incident, but released from custody without charges, according to Chicago ABC station WLS-TV.
"The night that my father died, his killer was released without charges and here we are three months later still waiting for someone to acknowledge that it is a crime to kick someone to death in the city of Chicago," said Omar Tungekar, the victim's son.
Police and the state attorney said the incident is still under investigation.
"Despite all the evidence, the State's Attorney remains reluctant to charge this man and what this reluctance signals to us is, as far as the state is concerned, my father's life had no value, that he was dispensable, not worth fighting for," said Rehman Tungekar.
The Uber driver has been removed from the using the app, a spokesperson told the Chicago Sun-Times.