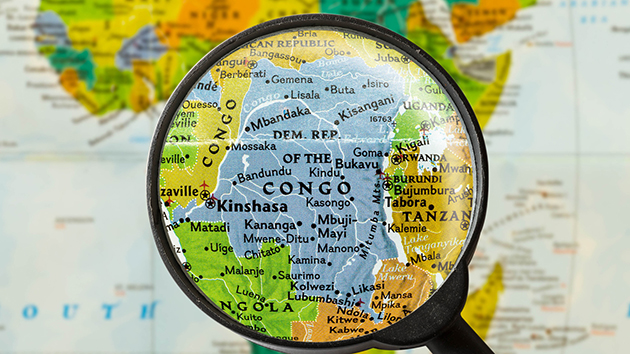 naruedom/iStock/Thinkstock(KINSHASA, Democratic Republic of Congo) — The current Ebola outbreak in the Democratic Republic of the Congo's volatile east is now the second largest in recorded history, with 426 confirmed and probable cases thus far, resulting in 245 deaths since Aug. 1, according to the country's health ministry.
The number of Ebola cases announced Thursday surpassed those of the 2000 Ebola outbreak in Uganda, making it second only to the 2014-2016 outbreak in multiple West African nations that killed 11,325 people, according to data from the U.S. Centers for Disease Control and Prevention.
The case fatality rate is currently 57 percent, which the International Rescue Committee, a nongovernmental aid organization, said is higher than typically seen at this stage of an Ebola outbreak, especially since a vaccine for prevention as well as experimental drug treatment are available for the first time.
"This tragic milestone clearly demonstrates the complexity and severity of the outbreak," Michelle Gayer, senior director of emergency health at the International Rescue Committee, said in a statement Thursday. "While the numbers are far from those from West Africa in 2014, we're witnessing how the dynamics of conflict pose a different kind of threat: a protracted outbreak is highly likely and the end is simply not in sight."
Ebola virus disease, which causes an often-fatal type of hemorrhagic fever, is endemic to the Democratic Republic of the Congo. This is the 10th outbreak and the worst that the country has seen since 1976, the year that scientists first identified the deadly virus near the eponymous Ebola River.
Among the 426 patients who have reported symptoms of hemorrhagic fever since the country's latest epidemic began, at least 379 of them have tested positive for Ebola, including 198 who have succumbed to the deadly virus. More than 37,000 people have been vaccinated for the disease in the outbreak zone since Aug. 8, according to the health ministry's daily bulletin on Thursday.
The outbreak has been heavily concentrated in the northeastern province of North Kivu, where a majority of all cases have been recorded in the conflict-torn city of Beni, which is home to 800,000 people. Ebola cases have also been recorded in neighboring Ituri province.
North Kivu and Ituri are among the most populous provinces in the Democratic Republic of the Congo and share borders with Rwanda, Uganda and South Sudan. They are also awash with violence and insecurity, particularly in the mineral-rich borderlands where militia activity has surged over the past year, all of which complicates the response to the outbreak.
The security situation in the region has at times limited the response efforts. Some field activities, including vaccination, were temporarily halted in Beni, the outbreak's epicenter, on Nov. 17 following attacks by an armed rebel group.
There is also misinformation and mistrust of the medical response from the local community, partly due to many years of conflict in the region. There is also a reluctance among some residents to seek care or allow health workers to vaccinate, conduct contact tracing and perform safe burials, according to health officials.
"No other epidemic in the world has been as complex as the one we are currently experiencing," the Congolese health minister, Dr. Oly Ilunga Kalenga, said in a Nov. 9 statement.
The International Rescue Committee, which has response teams on the ground in North Kivu, described the combination of insecurity, community resistance and disrupted or failing health services as a "perfect storm" for disease transmission.
"The outbreak is far from under control and it is highly likely that it will not be beaten for another six months. We fear that hundreds more people will lose their life in this outbreak," Gayer said in her statement Thursday. "Yes we need to see more funds and resources mobilized, but also address the impacts of the protracted conflict."
The World Health Organization (WHO) currently has 300 specialists deployed to the Central African nation to support the ongoing response efforts, with a focus on Beni as well as the new hotspots Butembo, Kalunguta and Katwa. Preliminary data indicate a positive impact of public health control measures in Beni and Kalunguta, but community engagement remains a challenge in Katwa, according to a press release from the WHO on Thursday.
There are also concerns regarding the high number of young children affected with the virus, according to the WHO. A total of 36 cases have been reported among newborn babies and children below the age of two, while 17 cases have been reported among pregnant women since the outbreak began.
The WHO said that although the risk of a global spread remains low, the risk of the outbreak spreading to other provinces in the Democratic Republic of the Congo as well as to neighboring countries remains "very high." Over the past week, alerts have been reported from South Sudan and Uganda, though Ebola has been ruled out for all those cases thus far.
Last month, the WHO heeded the recommendation of an expert advisory committee to not declare the Democratic Republic of the Congo's latest Ebola epidemic a public health emergency of international concern — a proclamation that would have mobilized more resources and garnered global attention.
The committee chairman, Robert Steffen, said they came to the decision by looking at three main criteria.
"Is it extraordinary? Is there a risk of cross-border spread? Is there potential for requiring international response?" Steffen told reporters in a teleconference Oct. 17.
Despite its conclusion, the committee emphasized in a statement that the Congolese government, WHO and partners "must intensify the current response" to the ongoing outbreak and that this "should be supported by the entire international community," or "the situation is likely to deteriorate significantly."
"I’ve accepted the recommendation of the committee but this does not mean that we are not taking the outbreak seriously," WHO's director-general, Tedros Adhanom Ghebreyesus, told reporters. "We will not rest until this outbreak is finished."
Copyright © 2018, ABC Radio. All rights reserved.