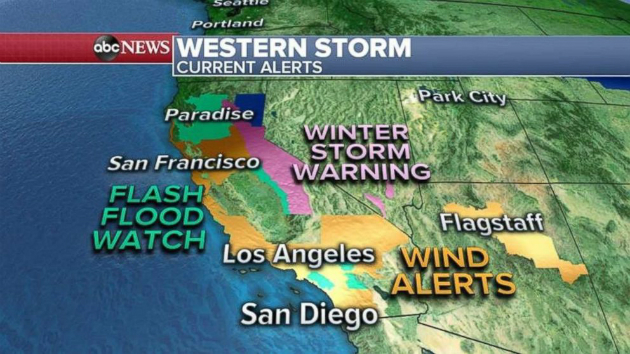 ABC News(NEW YORK) — Californians are preparing for the worst as heavy rains hit the state just weeks after two fires scorched Northern and Southern California.
Over the last eight days, up to 10 inches of rain fell in Central and Northern California, so the ground is very saturated. The recent wildfires left nothing to hold the ground in place so the threat for mudslides is high where the Woolsey and Camp fires burned tens of thousands of acres.
A new storm system moved into most of California overnight from north to south with heavy rainfall rates that have reached nearly 1 inch per hour.
So far almost 2 inches of rain have fallen in Los Angeles County with more to come. As the storm continues to move through California, numerous flood, wind and snow alerts are posted from California to Nevada and into Arizona.
As Thursday morning progresses, heavier rain will move into Southern California, around Malibu and Los Angeles, where the Woolsey Fire was located.
"With this rain coming in, we have a lot of steep hillsides, rocks that came down the hills a few days ago when we had a little bit of rain. We don't know what's going to happen today, but we want everybody to be prepared," said L.A. County Fire Department Capt. Brian Jordan.
In the Inland Empire, residents have been told to evacuate parts of Lake Elsinore, Corona and Glen Eden, where the Holy Fire burned about 36 square miles in mid-August.
Rain will also continue for Central and Northern California throughout Thursday, while heavy snow will be falling in the Sierra Nevada Mountains.
The storm system will move inland Thursday evening with the rain continuing for parts of Southern California. It will also move into the southwest deserts of Nevada and Arizona. Snow will spread from the Sierra Nevadas to the central and southern Rockies in Utah, Arizona and Colorado.
An additional 1 to 2 inches of rain is forecast for Southern California through the day Thursday with locally higher amounts. In the Sierra range, snow will pile up by the foot by Friday morning. The snow will also accumulate in feet in the Rockies with some areas getting 1 to 2 feet.
Copyright © 2018, ABC Radio. All rights reserved.

Wind chills plunging in the South from Raleigh to Tallahassee, Northwest braces for more rain
Christmas tree farmers prepare for bigger crowds, more demand this holiday season
Fauci says US must prepare for omicron variant: ‘Inevitably it will be here’
Nearly 200,000 Californians could be without power on Thanksgiving
US COVID-19 infections rise as Americans prepare for Thanksgiving
Ryan Reynolds hits ‘Antiques Roadshow’ in hilarious bit of ‘Red Notice’ promo