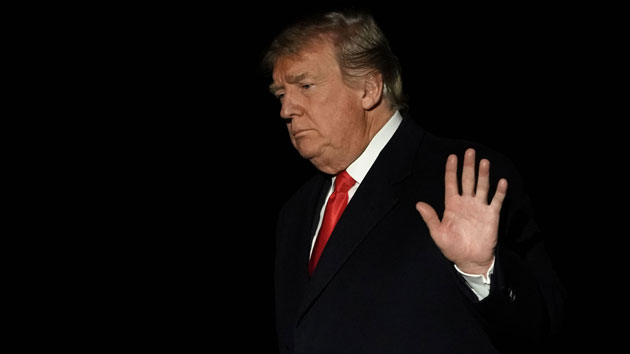 Alex Wong/Getty Images(WASHINGTON) — President Trump on Wednesday used his Twitter account to promote a false claim on immigration, and retweeted a post from a pro-Trump account that calls for deputy attorney general Rod Rosenstein, former law enforcement officials and other political opponents of the president to be put on trial for 'treason.'
Minutes after tweeting, without evidence, that special counsel Robert Mueller's investigators are "viciously telling witnesses to lie about facts," the president began a series of retweets of the account '@The_Trump_Train.'
Among the retweets was a graphic showing multiple individuals the president has targeted in his comments against the Russia investigation, including Mueller, former President Barack Obama, Hillary Clinton, former Attorney General Loretta Lynch, and former FBI director James Comey.
The graphic suggests that all should be investigated for "treason," but it also includes a picture of current Deputy Attorney General Rod Rosenstein.
The White House did not immediately respond to a request for comment on whether the president believes Rosenstein or the others should truly be put on trial for treason. Trump in the past has suggested his desire to fire Rosenstein who oversaw the special counsel investigation prior to the firing of Attorney General Jeff Sessions, but more recently he has indicated their relationship has improved.
Immediately after sharing the graphic, the president continued retweeting the account, including a tweet that spread a false claim that "Illegals can get up to $3,874 a month under Federal Assistance program."
The claim in the tweet appears to originate from a post that gained notoriety on Facebook in 2017, that showed a document of a $3,874 payment not to an undocumented immigrant — but a family of five refugees who applied for residency through a resettlement program.
But the alleged payment was part of a resettlement request made in Canada, not the United States.
The White House didn't immediately respond to a request for comment on whether the president was made aware of the error.
Copyright © 2018, ABC Radio. All rights reserved.