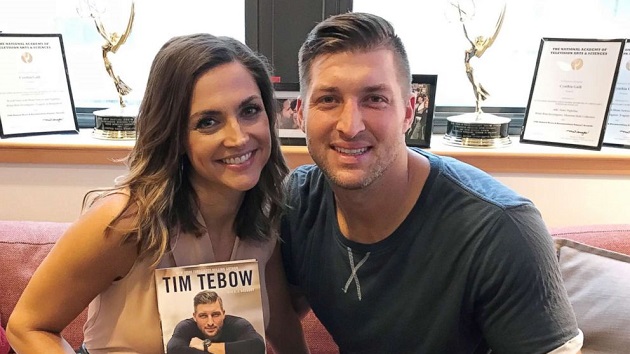 ABC News(NEW YORK) — ABC News' Paula Faris sat down with Tim Tebow for the latest epsiode of her new podcast, "Journeys of Faith with Paula Faris."

The podcast featuring conversations on how faith has helped guide newsmakers and celebrities through their best and worst times. New episodes are available every Wednesday.
Here is Faris in her own words, about her new episode with Tebow:
Tim Tebow sees his career switch as God's work
How do you give up on a dream? Just ask Tim Tebow.
There are few professional athletes who have been mocked and criticized as much as him. When he visited our ABC News studios in New York City, he brought his girlfriend, her parents and a strong message about failure and identity.
You see, he tells me, his dream of playing in the NFL "didn’t go as planned." It was hard to give up on it. And there are still moments when he watches a game and thinks, “I could totally do that.”
Tebow, who’s been promoting his new book, This Is The Day, is now trading one dream for another: pursuing Major League Baseball and playing in the New York Mets’ minor league system.
But will it all be worth it if baseball doesn't work out?
How does he feel about his career switch?
“I still feel like I could play (in the NFL). God used the highs and lows for a purpose. He opened up baseball.”
How does he identify himself?
"What happens when football is over? What happens when baseball is over? What happens when people don’t remember my name or who I am? If I found my identity in that, when it’s done, I’d be crushed. There’s nothing left."
Copyright © 2018, ABC Radio. All rights reserved.

“It’s the moment I’ve waited for my entire life”: Michael B. Jordan takes the reins of his career, and ‘Creed III’
‘God is good’: Ahmaud Arbery’s family, others react to guilty verdicts
PA’s unemployment rate down to 6.0 percent in October
See Tim McGraw and Faith Hill in first look at ‘Yellowstone’ spin-off ‘1883’
Dakota Johnson on allegations against her former costars and if ﻿’Fifty Shades of Grey’ affected her career
Hiring event Friday 10-3 at DuBois Mall with more than 50 employers