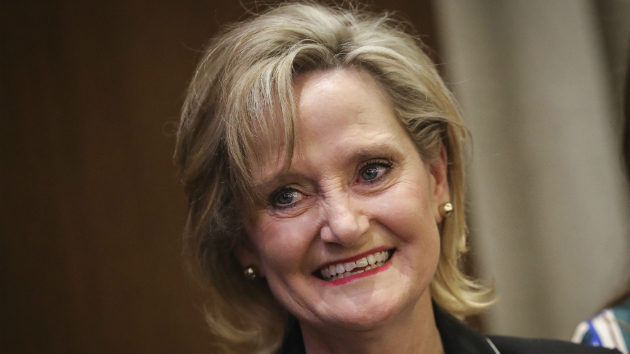 Drew Angerer/Getty Images(JACKSON, Miss.) — Mississippi has elected its first woman to Congress in the state's history.
Republican Sen. Cindy Hyde-Smith thwarted an against-the-odds challenge from Democrat Mike Espy, various news outlets have projected. Espy mounted an aggressive campaign for the last remaining Senate seat of 2018, but the race became competitive in its final weeks after numerous missteps by Hyde-Smith, including recently revealed controversial comments that harkened back to the state's racially-charged history.
In a short victory speech to supporters Tuesday night, Hyde-Smith called it "unbelievable night."
"The reason we won is because Mississippians know me, and they know my heart," she said to a crowd of supporters in Jackson. "No matter who you voted for today, I’m going to always represent every Mississippian."
After celebrating her win on stage, Hyde-Smith elaborated on her controversial remarks, telling reporters, "We have apologized for that, we’re going to move on and go forward."
In the most extensive response to a series of controversies that drew national attention to the race, she defended her "public hanging" comments by saying, "I’m a cowgirl and when a cowgirl references western movies that I've seen hundreds of, and somebody twists it, that's just it, you’ve gotta roll with the punches."
President Donald Trump, who endorsed Hyde-Smith throughout the election, sent out a congratulatory tweet soon after her win Tuesday night.

Congratulations to Senator Cindy Hyde-Smith on your big WIN in the Great State of Mississippi. We are all very proud of you!

Moments before Hyde-Smith spoke, Espy took the stage before a sober crowd in the Mississippi Civil Rights Museum in Jackson and told the audience of his opponent, "She has my prayers to unite a very divided Mississippi. She has my prayers and willingness to help her."
In the wake of his defeat, Espy delivered a message of hope to his supporters, "We built the largest grassroots organization that our state has ever seen in a generation. We did that through a coalition of voters, white and black, who shared a belief that Mississippi's future will be brighter than Mississippi's past. Make no mistake, tonight is the beginning. Tonight is not the end."
"When this many people show up, when this many people stand up, when this many people speak up, it is not a loss, it is a movement," he asserted.