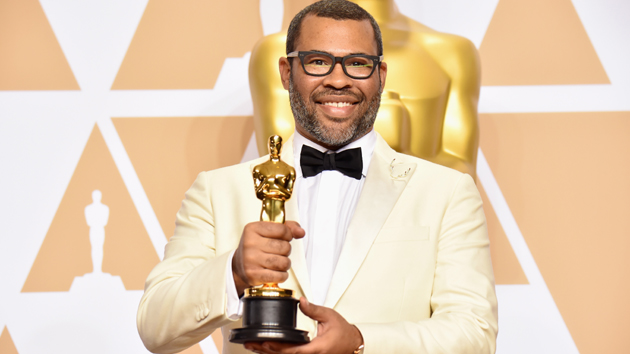 According Deadline, MGM Pictures has teamed up with Oscar-winning Get Out writer/director Peele's Monkeypaw Production company to produce a reboot of the 1992 horror film. The new film, set to hit theaters in 2020, is reported be a "spiritual sequel" to the original, but set in "the now-gentrified section of Chicago where the Cabrini-Green housing projects once stood."

The classic original film was based on a short story by Clive Barker and starred Tony Todd as the infamous Candyman — the son of a slave who became an artist and was later mutilated and killed by his lover's father. The story's urban legend states that if you say the Candyman's name five times in a mirror, he'll appear and kill the person with use of the hook he wears where his right arm used to be.
Nia DaCosta, who made her feature debut this year in Little Woods, starring Tessa Thompson and Lily James, will direct the film from a screenplay from Peele and Win Rosenfeld.

“The original was a landmark film for black representation in the horror genre," said Peele in statement. "Alongside Night of the Living Dead, Candyman was a major inspiration for me as filmmaker — and to have a bold new talent like Nia at the helm of this project is truly exciting."

He continued, "We are honored to bring the next chapter in the Candyman canon to life and eager to provide new audiences with an entry point to Clive Barker’s legend.”

COVID-19 live updates: First European case of new variant from South Africa confirmed
Sec of Ag: Make it a PA Thanksgiving, buy local
Enchanting sequel news: First look at ‘Hocus Pocus 2’; ‘Disenchanted’ gets a release date
‘And Just Like That…’ there’s a teaser-trailer to the ‘Sex and the City’ sequel
‘Home Sweet Home Alone’ is a sequel, not a reboot, says star Aisling Bea
Anthony Hemingway to helm ‘The Preacher’s Wife’ remake; Regina King to direct, produce ‘A Man in Full’ for Netflix