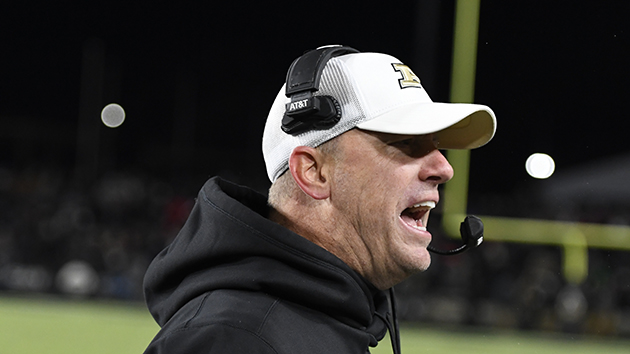 Photo by Eric Lars Bakke / ESPN Images(NEW YORK) — Purdue head football coach Jeff Brohm isn't leaving West Lafayette, Indiana anytime soon, despite a chance to take the same job at his alma mater, Louisville.
Brohm grew up in Louisville and played quarterback for the Cardinals. But after meeting with Louisville athletic director Vince Tyra on Tuesday, Brohm released a statement saying he would remain at Purdue.
"Going home was very appealing and meaningful to me," he admitted. But, he said, "the timing was not ideal."
Louisville went 2-10 this season, prompting the firing of their head coach Bobby Petrino. Purdue has gone 13-12 in two seasons under Brohm.
"After intense and thorough discussion, I believe it is important to finish the building process we have begun and honor the commitment I made to our football program, players, and recruits," Brohm added in his statement. "…I believe that remaining at Purdue is the right thing to do, and I am excited for the challenges ahead."
Copyright © 2018, ABC Radio. All rights reserved.