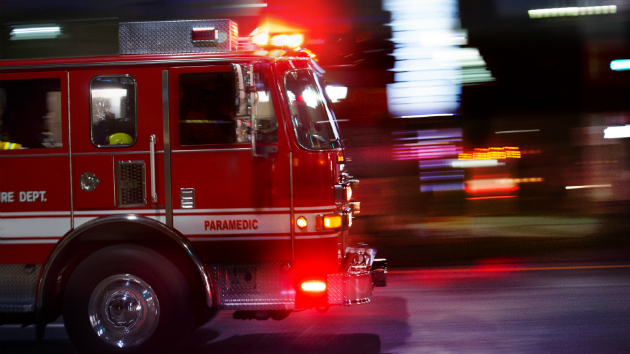 iStock/Thinkstock(LOGANSPORT, Ind.) — At least four people have died after getting trapped in a house fire near Logansport, Indiana.
The fire ignited at the residence just before 2 a.m. local time on Wednesday in a rural area of Cass County, about three miles outside the city.
The bodies of two adults and two children were found in different parts of the home, Cass County authorities announced Wednesday afternoon.
Two adults managed to escape as the flames engulfed the home and were taken to a local hospital, according to Indiana State Police Sgt. Tony Slocum.
Family members and the adults who escaped indicated that the bodies of two more people may be in the rubble, authorities said.
The remote location of the house posed a challenge for firefighters trying to access the nearest water source to douse the flames, Slocum said. The early morning blaze has now been fully extinguished.
The home was engulfed in flames by the time two Cass County deputies arrived on the scene, authorities said. One of the deputies tried to gain access to the second story of the home by climbing onto the first floor roof, but he was pushed back by smoke and flames.
The roof and second story of the home collapsed as a result of the blaze, according to the sheriff's office.
The deceased have not been identified.
"Right now, we have one confirmed fatality," Slocum told reporters at a press conference Wednesday. "We're obviously in the stages of trying to get into the structure and see if there are more bodies to be recovered. We anticipate that to be the case but we haven't verified that."
The total number of missing individuals in the house fire has not been confirmed, according to Indiana State Fire Marshal Jim Greeson.
"There's so much destruction here," Greeson told reporters, adding that it's unclear whether the residence was equipped with smoke detectors.
The Cass County Sheriff's Office previously told ABC News that six people — four children and two adults — were killed in the fire.
The cause of the blaze remains under investigation and the Indiana State Fire Marshal's office is leading the probe, which is being treated as a possible criminal case.
"We're going to consider it a criminal investigation until we find out otherwise," Slocum told reporters. "We're very early in this investigation."