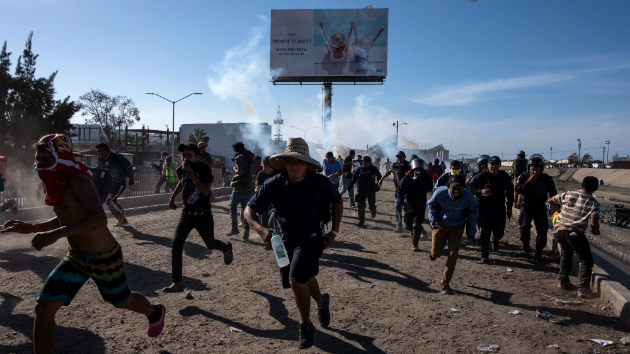 GUILLERMO ARIAS/AFP/Getty Images(NEW YORK) — The Honduran mother seen in a widely circulated photo wearing a colorful Disney Frozen T-shirt while fleeing from tear gas at the U.S.-Mexico border with her children told ABC News that she feared for their lives as the canisters of gas fell all around them.
Maria Meza, 39, left her hometown of Villanueva to escape the gang violence and lack of employment, she said, describing the situation there as "terrible." The single mother of nine was only earning about 800 Honduran Lempiras — about $33 in U.S. currency — a week, and one of her older children was recruited by a neighborhood gang, she said.
"The salary was not enough to support them," Meza said. "… They told me the U.S. was a country of opportunities where one can work. That's why I came to see if I could support my children."
Meza had five of her children, ranging in age from 5 to 14, in tow during the long journey, among a caravan of thousands who walked from Honduras, through Mexico and to the edge of the U.S.
She and her kids left the caravan on Sunday and were standing at a border fence near the San Ysidro Port of Entry in Baja California, Mexico, when three canisters filled with tear gas landed next to them. Several other mothers and children were near the fence as well, Meza said.
Meza described a terrifying scene that unfolded as she and her children fled the toxic gas.
"I felt like I couldn't see anything because of the smoke," she said, adding that she cried as she held her children. "I was asphyxiated. I was scared with them."
"In the moment, I felt scared and I felt I was going to die with them," she added.
Meza's 5-year-old twin girls were still coughing more than two days after they inhaled the gas, Meza said.
On Monday, President Donald Trump defended the use of tear gas by U.S. Customs and Border Patrol agents, saying it was to prevent the border from "being rushed by some very tough people."
"Nobody's coming into our country unless they come in legally," Trump told reporters before embarking on a trip to Mississippi.
The border crossing at San Ysidro — north of Tijuana, Mexico, and south of San Diego — was closed for much of the day Sunday due to the clash. Thousands of Central American migrants are waiting in Tijuana and surrounding areas to apply for asylum in the U.S.
Three of Meza's children remained in Honduras, while one of them has been living in Louisiana for two years, she said.
Her 16-year-old son "ended up in drugs" and joined the gang, despite her begging him not to.
"He told me, 'Mom, they are forcing me to enter the Mara (gang) and sell drugs,'" Meza said.
The gang showed up at her house one day to ask for permission for her son to join, but later told her they would make the decision themselves when she refused, she said.
"They told me he didn't count as my son anymore — that I had lost him," Meza said, breaking down in tears.
Part of Meza's decision to leave, she added, was to "give the best" to her children, as well as protect her 14-year-old son, who may have been the gang's next recruit.
"I feel destroyed because I know I can't get my son back," she said. "I lost him, and I don't want this to happen with the other children."
Meza pleaded with Trump to let her family into the U.S., saying that Hondurans are "hard-working people" who need jobs.
"I'm asking God that Donald Trump opens the doors here," she said, "so we can get in."
Copyright © 2018, ABC Radio. All rights reserved.

You win, or you die: ‘Game of Thrones’ turns 10
Man accused of touching himself while as children walked by
More than 172,000 migrants, most in nearly two decades, stopped at US-Mexico border in March
Texas investigating child abuse allegations at temporary migrant facility, governor says
Why Native American children have higher rates of disability
Bus carrying unaccompanied migrant girls arrives at Houston shelter