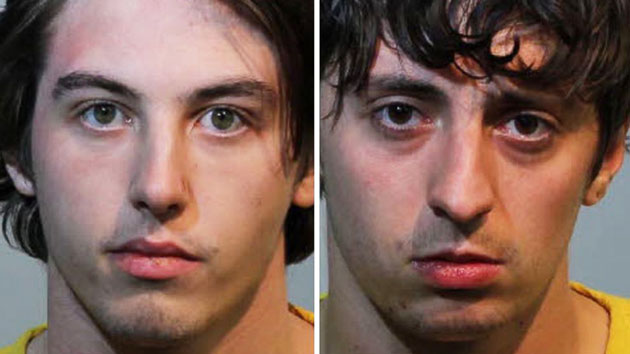 Seminole County Sheriff(SEMINOLE COUNTY, Fla.) — A Florida man was stabbed to death after being lured into a "revenge" trap allegedly by two former roommates, who accused him of stealing a PlayStation 4 video game, officials said.
The suspects, Jake Bilotta, 22, and Ian McClurg, 21, were arrested after their new roommate came home to find them allegedly trying to stuff the victim's body into a plastic garbage bag, Seminole County Sheriff Dennis Lemma said at a news conference on Tuesday.
"They lured him back there for revenge," Lemma said of the victim, who was identified Wednesday as Joshua Barnes, 24, according to Seminole County Sheriff's Office.
Lemma said the victim lived with Bilotta and McClurg at a home in Maitland, Florida, for about two weeks before he was evicted earlier this month.
Lemma said the suspects believed Barnes broke into their home over the weekend and stole a PlayStation 4 video game.
"It is the most bizarre and disgraceful act that one can imagine … over these gaming systems and things that have little value, definitely no association with the value of human life whatsoever," Lemma said.
He said Barnes was stabbed multiple times with a 7-inch chef's knife.
Investigators believe Bilotta and McClurg invited the victim over to their home just before midnight Monday on the pretense that they would go to a party together, Lemma said.
"At that time, Jake met the individual armed with a 7-inch chef's knife … got him into the house and stabbed [Barnes] multiple times," Lemma said.
The sheriff said that while Bilotta allegedly stabbed Barnes numerous times, McClurg was equally involved because he helped Bilotta plan the killing.
The suspects' new roommate came home from a Tinder date Monday and found Bilotta and McClurg allegedly trying to put the victim's body into plastic trash bags, Lemma said.
"The plan was to kill him, put him in plastic bags and then find someplace to bury him," Lemma said.
He said the roommate who stumbled upon the killing ran back to his car where his date was waiting and called 911.
McClurg and Bilotta were both arrested on suspicion of premeditated homicide charges and booked at the John E. Polk Correctional Facility in Sanford, Florida.