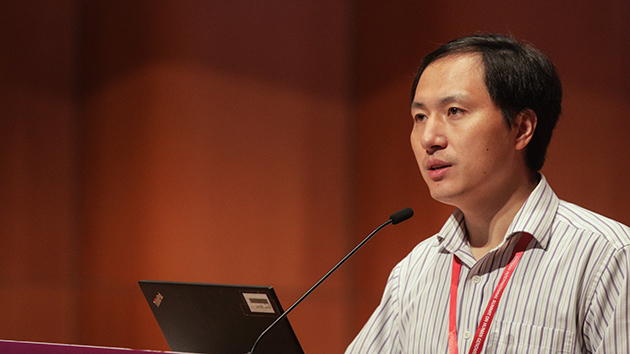 Photo by S.C. Leung/SOPA Images/LightRocket via Getty Images(NEW YORK) — A Chinese professor who claims to have successfully altered the DNA of human embryos that became twin girls has publicly defended his work against a chorus of criticism and announced there may be another "potential pregnancy."
Dr. He Jiankui, a U.S.-trained Chinese scientist, shocked the world by claiming on YouTube last week that the first-ever genetically edited human births had taken place. He’s claims have not been independently confirmed. In the video, He declined further comment until presenting his findings to a bustling auditorium filled with journalists and camera crews at a Hong Kong scientific conference on Wednesday, after fallout and international outrage over what some have called a “designer baby” experiment.
"For this specific case, I feel proud actually," He said at the second International Summit on Human Genome Editing, a gathering of genetics specialists from around the world.
He also apologized, but only for how the news broke
"I first must apologize that this result leaked unexpectedly, taking away from the community of the full data being presented immediately in a scientific venue," He said.
He and his team allegedly disabled a gene which makes a protein that makes it possible for HIV to infect people’s cells, potentially making these babies resistant to HIV. Many attendees said there were other ways to prevent the spread of HIV.
Dr. Jennifer Doudna, co-inventor of the gene-editing tool that He allegedly used, told ABC News the scientific community is "struggling to understand" his claims.
"I couldn't guarantee to you that he did what he claimed," she said. "We're all struggling to understand the implications of this work."
Doudna also called his claims, if true, a violation of accepted scientific guidelines around genetic editing.
"All of those things were ignored in this study and it's extremely disturbing," she said. "It's highly unacceptable and highly upsetting."
Though the reports are unconfirmed, the announcement has been controversial among laypeople and scientists alike.
During a question and answer session, He was asked if there was another viable pregnancy with genome editing from his clinical trials.
"There is another one, another potential pregnancy," He answered, adding that it still needs to be monitored.
He claimed he used a technique called CRISPR/Cas9, which, if true, would be the first time the technique has been used to alter genes in unborn humans.
This kind of interference with human embryos is banned in the U.S. because the implications of altered genetic traits passed on to future generations have not yet been studied. Cloning is illegal in China, but the rules around the genetic editing of human embryos are less clear.
Rice University has announced an investigation into Dr. Michael Deem, an American professor of biochemical and genetic engineering, after reports that he was involved in the alleged genetic editing case in China.
The university said that it had "no knowledge of this work" and that to its knowledge, the work was not performed in the U.S.

“I don’t think it has been a transparent process,” said David Baltimore, a biologist who chaired the Hong Kong conference’s organizing committee, when he took the stage after He’s presentation. “We only found out about it after it happened, and after the children were even born. I personally don’t think it was medically necessary.”
Copyright © 2018, ABC Radio. All rights reserved.