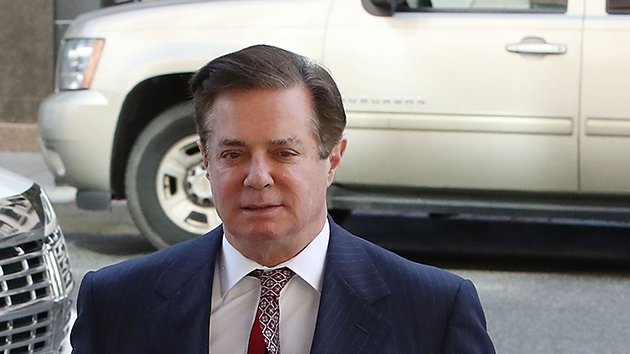 Photo by Mark Wilson/Getty Images(WASHINGTON) — Despite widespread speculation that President Donald Trump could pardon Paul Manafort, several experts told ABC News that such a maneuver might not solve all of the convicted former Trump campaign chairman’s legal troubles.
The special counsel team that prosecuted Manafort on federal financial charges related to his lobbying work in Ukraine has laid down what one source familiar with the case called “a trail of bread crumbs” that could allow city or state prosecutors from New York – where Manafort has maintained multiple residences, including a condominium in Trump Tower – to pursue charges of their own.
“The President of the United States has the power to issue pardons for crimes against the United States,” said John Moscow, a former prosecutor with the New York District Attorney’s office. “He cannot pardon people for crimes against states.”
Manafort’s attorneys did not respond to a request for comment.
In August, Manafort was convicted by a federal jury in Virginia on eight of 18 counts of bank and tax fraud, and in September, Manafort pleaded guilty to conspiracy and witness tampering in Washington, D.C., in exchange for his cooperation in Mueller’s ongoing probe. But this week, special counsel attorneys alleged to a federal judge that, despite forging a cooperation agreement in the D.C. matter, Manafort had continued to lie to investigators and was in breach of his agreement, a characterization that Manafort’s attorneys disputed.
White House Press Secretary Sarah Sanders said she is “not aware of any conversations for anyone’s pardon involving this process,” but recent developments have renewed questions about whether the president might be considering clemency for his former campaign chairman.
On Wednesday, Trump told the New York Post on Wednesday that a pardon “was never discussed, but I wouldn’t take it off the table. Why would I take it off the table?”
But several legal experts told ABC News that even if Manafort were to receive a pardon, that would not preclude New York officials from initiating action against him.
“If he committed a tax crime in the state, he’s still liable,” Moscow said. “And there are other possible crimes, like falsification of records, if the prosecutors have evidence, nerve, and creativity.”
Daniel R. Alonso, former chief assistant district attorney in Manhattan and now managing director at the global compliance firm Exiger, said the Manhattan district attorney’s office “doesn’t go after defendants who have been convicted in federal court but that doesn’t mean they wouldn’t if there was some reason, like a pardon.”
While double jeopardy would prevent Manafort from being prosecuted in New York on certain offenses with which he has previously been charged by federal officials, there is an exception for tax fraud.
“You can now have a state tax prosecution,” Alonso said. “The problem is the crimes by definition are less serious. It doesn’t mean they’re not serious but they’re a lot less serious than what he was convicted of in federal court.”
New York Attorney General Barbara Underwood, whose office has broad jurisdiction to prosecute tax fraud cases, has been pushing to change state law so prosecutors can pursue defendants on state crimes even if they’ve received a pardon on federal charges.
“This office has been urging Albany to close the loophole in New York’s double jeopardy law for nearly a year,” said Underwood’s spokeswoman Amy Spitalnick. “President Trump has repeatedly abused his pardon powers to undermine the rule of law and, especially in light of recent events, it’s more urgent than ever that the state legislature act.”
If New York prosecutors sought to bring charges connected to Manafort’s state tax returns, his guilty pleas related to his federal taxes could sting, legal experts told ABC News.
Anthony Capozzolo, a former federal prosecutor, said a pardon would not protect Manafort from concessions he made in pleading guilty in federal court.
“In the case of a pardon, that admission is still there,” Capozzolo said. “You are no longer convicted of the crime. But the admission you make in the court process is not wipe out. … That would make it a very difficult case to defend.”
Matt Olsen, a former federal prosecutor, now an ABC News consultant, said if there was a breach of his cooperation agreement, the special counsel has wide latitude to bring further legal action against Manafort if there is cause to, including any activity he described during his talks with the special counsel.
“The government is relieved of any obligations – they can use the information from him in any way they want, including directly against Manafort,” Olsen said. “Including in a state court trial.”
Copyright © 2018, ABC Radio. All rights reserved.

‘Breaking Bad’ Emmy winner Aaron Paul expecting second child with wife Lauren: “We love you so much already”
As concerns over omicron variant grow, experts say don’t wait to get a booster
Tracking breakthrough cases key to pandemic response, experts say
Should you get a booster shot? Experts say it’s time
Thanksgiving travel might be messy amid shortages and storms, experts say
Biden to pardon turkeys Peanut Butter and Jelly ahead of Thanksgiving