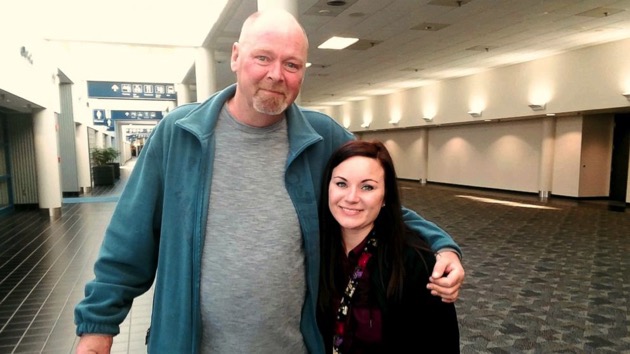 Duane Kellems(HOUSTON) — Sabrina Payne is one of millions of people who’ve used a DNA home-test kit. But she’s been on a roller coaster of emotion since the results turned her life upside down.
Payne, a Houston-area mother and EMT, took the test along with her paternal grandmother.
“She is with my kids," Payne told ABC News. "She is everything in my life.”
“We just formed a bond that has always been there from since she was a baby,” Payne’s grandmother, Sandra Gomez, said. But that bond was tested when the results showed that Payne’s biological father was not the man who raised her.
“There was never any question about my paternity,” Payne said. “When I figured out we weren’t biologically-related, it was like somebody just punches you in the stomach.”
Reeling, Payne turned to the private Facebook support group founded by Catherine St. Clair for people with unexpected DNA results.
All its members are "NPE," for "Not Parent Expected."
“We’re ridiculed a lot because the attitude is, you shouldn’t be talking about this,” St. Clair told ABC News’ JuJu Chang. “I’m a human being. I’m not a secret.”
The Facebook group helped Payne find her biological father, who had been stationed in Germany at the same time as her father who raised her.
“I thought how do I tell this man, 'Hey I think you are my biological father,'” Payne said. She reached out to the man, Duane Kellems, who now lives in Indiana after serving in the military.
“She asked me if I had been stationed in Germany at a certain time and some certain other locations and people,” Kellems told ABC News. “I informed her I had been.”
“He was very accepting from the beginning,” Payne said. After months of wondering, Payne met her biological father in person for the first time, with her grandmother’s support.
“I know if I were in her shoes, I would want to do the same thing,” said Gomez.
Kellems told ABC News, “I know this is the final piece for her puzzle.”
Payne also met Kellems’ mother and other daughter.
And last week, Kellems went to Payne’s Thanksgiving dinner to meet with more of her family, including her mother.
ABC News spoke with Payne’s mother and the father who raised her. Both are supportive of Payne.
“Not every outcome is a positive outcome," Payne told ABC News of other people's attempts to reach out to newly-discovered relatives. “However it shouldn’t remain a secret. This is you. This is part of your identity.”
Ancestry.com’s chief scientific office told ABC News in a statement that, "Almost every Ancestry customer finds something surprising as they embark on a self-discovery journey with us, and for most customers it’s something exciting and enriching; but there are certainly cases where a discovery might be unexpected."
The statement continued to say that they have a team of service members who "trained to help customers understand and interpret their DNA results from our tests."
Copyright © 2018, ABC Radio. All rights reserved.