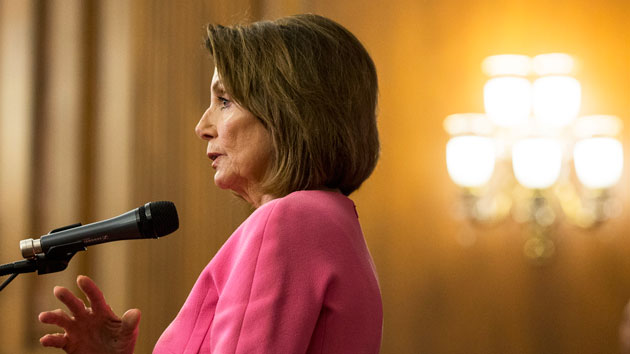 Zach Gibson/Getty Images(WASHINGTON) — Nancy Pelosi is poised to win the nomination of her caucus for Speaker of the House, but Wednesday’s leadership elections are a precursor to the real drama coming on the first day of the new Congress.
As the rules currently stand, Pelosi only needs to win the support of a simple majority in her caucus –118 votes – to secure the party’s nomination for Speaker when the 116th Congress takes its first vote on January 3 next year.
Some lawmakers had pressed, but so far failed to convince, the caucus to adopt a rule where only a candidate receiving 218 votes in the caucus election could be the floor nominee for speaker.
Pelosi wrote her Democratic colleagues just before Thanksgiving, encouraging the caucus to stick to tradition and support the closed-door election winner on the floor.
“Respectful of the views of all Members, I request that we all support the nominee of our Caucus for Speaker on the Floor of the House,” Pelosi wrote last Friday. “Our diversity is our strength and our unity is our power.”
With at least 233 Democrats joining Pelosi in the next House majority (one race remains undecided), she can only afford to lose the support of 16 Democratic colleagues.
A gang of 16 rebellious Democrats have signed onto a letter stating they “are committed to voting for new leadership” both in caucus and on the floor– and a couple more have pledged verbally to oppose Pelosi, though they did not sign the letter.
So far the savvy veteran politician has already flipped two signees – Reps. Stephen Lynch and Brian Higgins, and won the support of progressive newcomer Rep.-elect Alexandria Ocasio-Cortez, as well as a potential opponent for Speaker, Rep. Marcia Fudge.
Wednesday’s caucus leadership elections begin at 10:00 a.m. and are conducted via secret ballot – so members could anonymously oppose Pelosi without suffering her wrath if and when she returns to the Speaker’s chair next year.
If nobody is nominated to challenge Pelosi, there will be a motion to expedite the process with a unanimous consent voice vote, which would mean that there wouldn't be a recorded vote tally. This would help Pelosi's case for speaker because there wouldn't be any opposition to her on the record from the closed-door election.
Pelosi's critics are expected to object to the potential motion, triggering an actual vote by secret ballot, where members could vote for Pelosi or write-in their own candidate.
Two years ago, 63 Democrats voted for Rep. Tim Ryan / against Pelosi for Democratic leader. Now, the "Never Nancy" crowd is under some pressure to match or improve on that number, even if they don't think they have to do anything other than prove she doesn't have 218.
Once there is a resolution, the caucus will likely announce the winner's tally publicly, revealing Pelosi’s level of support from within the caucus.
Even if Pelosi does not garner 218 votes on Wednesday, she'll have six more weeks to firm up support, cut deals and flex her power before the January 3 vote.
Copyright © 2018, ABC Radio. All rights reserved.