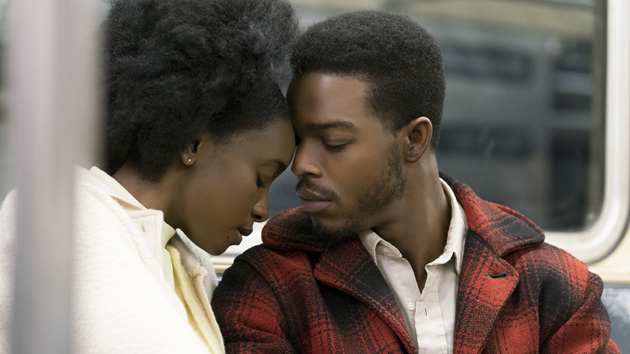 The new promo, set to the music of The Fugees' classic, "Killing Me Softly," features the film's stars — Kiki Layne and Stephan James — as they experience love and heartbreak during some of the drama's most emotional scenes.

If Beale Street Could Talk is based on the novel of the same name by James Baldwin. It follows Tish, a young woman determined to prove the innocence of her fiancé, Fonny, who's been accused of rape. Newly engaged and now pregnant, Tish works to prove Fonny's innocence before their baby is born.

If Beale Street Could Talk was previously set to debut November 30 in New York, followed by December 7 in Los Angeles and then expanding further in the weeks after that. It'll now debut December 14 in New York and Los Angeles, with additional theaters to be added on December 25.

If Beale Street Could Talk opens in wide release January 15.

Family, fighter jets and flying cars: see the new trailer for ‘Fast and Furious 9’
See Ryan Reynolds, Salma Hayek and Samuel L. Jackson in ‘Hitman’s Wife’s Bodyguard’ trailer
‘The Talk’ returns to CBS following Sharon Osbourne’s departure
Watch the trailers for ‘Set The Record Straight: The Jam Master Jay Case’ and Uzo Aduba’s ‘In Treatment’
See Amy Adams and an all-star cast in creepy new trailer for ‘The Woman in the Window’
Check out the trailer to the animated ‘Batman: The Long Halloween’