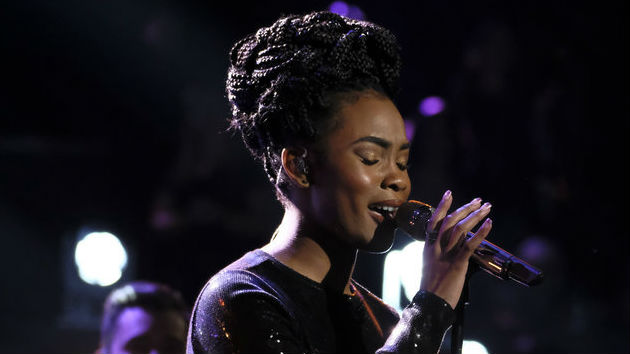 Kennedy Holmes on "The Voice; NBC/Trae Patton
Posted on November 27, 2018 by ABC News

Kennedy Holmes on "The Voice; NBC/Trae Patton(LOS ANGELES) — The Voice live rounds continued on Monday, with the top 11 artists competing for America’s votes, performing songs the fans chose for each of them to sing. Along the way, they were advised by their coaches Adam Levine, Blake Shelton, Jennifer Hudson and Kelly Clarkson.

Team Blake’s raspy-voiced rocker Dave Fenley led off, tackling Bill Withers’ “Use Me,” which he welcomed because it showcased the “soul side” of his voice. Dave also showed off his beatboxing skills. Blake called the performance a defining moment in Fenley’s voice run.

Chevel Shepherd, Team Kelly’s 16-year-old country singer with the powerhouse voice, showed off her “feisty” side with Kacey Musgraves’ “Space Cowboy.” After the performance, Kelly hailed the teen as a “great storyteller.”

Pop artist and Tennessee native, Reagan Strange, 14, was given Avril Lavigne’s “Complicated.” Her coach, Adam, noted the song was “deceptively hard” to sing, but thought it was the perfect vehicle to show off Reagan's “serious chops.” Adam followed the performance by declaring Strange could not only win The Voice, but become a “tremendous star” and influence kids her age.

Another Team Kelly artist, gospel singer, Kymberli Joye, drew a song that was right in her wheelhouse: “Break Every Chain,” by Tasha Cobb Leonard. The performance brought all four coaches to their feet, with Clarkson declaring Joye had a voice that came “straight from God,” even comparing her to a young JHud.

Chris Kroeze, also from Blake’s team, got to show off his guitar playing, as well as his gritty voice on his fan-selected song, The Doobie Brothers’ “Long Train Runnin.’” After the performance, Blake said Chris keeps improving with every performance.

Team Jennifer’s MaKenzie Thomas, who during rehearsals noted she wanted to be a gospel/R&B artist, put a “Destiny’s Child” spin on the Bee Gees’ “Emotion.” Following the live performance, Jennifer described MaKenzie’s voice as being “like butter,” before praising the rendition as “flawless.”

Blues-singer Sarah Grace, 15, from Team Kelly, was given “Dog Days Are Over,” by Florence + the Machine. While Sarah Grace believed the song connected with the blues, she thought it also gave her a chance to tackle something a little more contemporary. Blake called Sarah Grace’s live performance her best to date, while Kelly declared Sarah Grace a “smart singer” for her age.

DeAndre Nico, the soul singer from Team Adam, took the stage next to sing Jodeci’s “Cry for You.” Levine thought it was the perfect selection for DeAndre, explaining that no one left in the competition could “belt out this song and do it with [as much] conviction.” Adam was pleased with the performance, saying DeAndre had “all of the elements,” explaining that the artist was more driven than the other competitors, had the best tone and commanded the world’s attention.

Team Jennifer’s Kennedy Holmes, closed out the show, singing her fan pick, “Greatest Love of All,” by Whitney Houston. Hudson, addressing the camera, said Kennedy was “ready for the competition” and “ready for a career,” as she guided the teen “down Whitney Lane,” helping Kennedy channel Houston’s classic style and moves. Afterwards, Jennifer paid Holmes the ultimate compliment, declaring, “Mama Whitney is proud somewhere up there."

The Voice returns tonight at 8:00 ET on NBC.