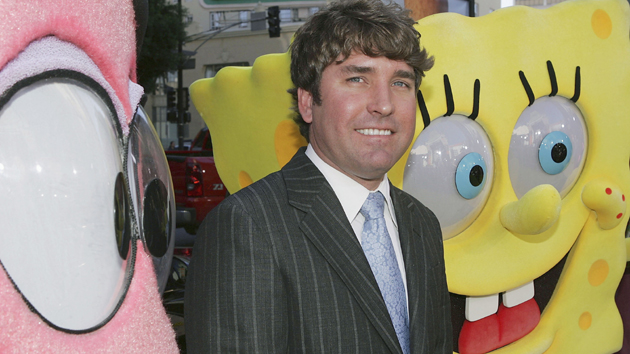 Hillenburg at the 2004 premiere of "The SpongeBob SquarePants Movie"; Mark Mainz/Getty Images
Posted on November 27, 2018 by ABC News

"We are sad to share the news of the passing of Stephen Hillenburg," reads a message posted on Nickelodeon's Twitter and Instagram. "Today, we were observing a moment of silence to honor his life and work."

Oklahoma-born Hillenburg earned a degree in marine biology and first developed ocean-dwelling comic characters to help teach his students as an instructor at California's Orange County Marina Institute. He soon returned to college to study animation, and first joined Nickelodeon in the mid-1990s to work on the animated show Rocko's Modern Life.

Hillenburg further developed the ocean-dwelling comic characters he created while teaching, turning them into SpongeBob SquarePants. The animated series — featuring the title character and his neighbors Squidward Tentacles the octopus, Patrick Star the starfish, Mr. Krabs, Gary the Snail and many others — debuted on Nickelodeon in 1999 and has aired since, despite Hillenburg ultimately leaving the show as executive producer.

Hillenburg also co-wrote and directed the 2004 hit theatrical release The SpongeBob SquarePants movie and co-wrote its 2014 sequel, The SpongeBob Movie: Sponge Out of Water. The show itself has become an industry unto itself, with merchandising, music releases, video games, comics, even theme park rides and a Tony-winning Broadway musical.

No cause of Hillenburg's death was given, although he revealed in 2017 that he'd been diagnosed with amyotrophic lateral sclerosis, or ALS.