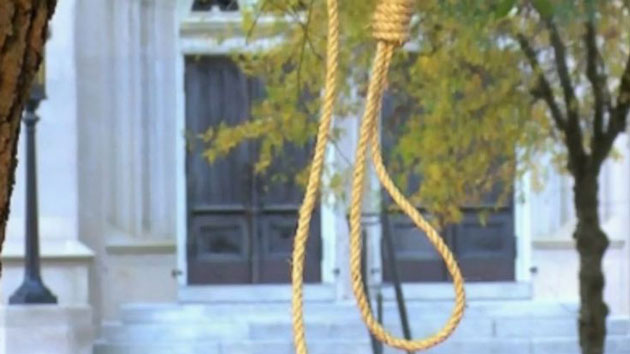 WLBT(JACKSON, Miss.) — Several nooses were found hanging outside of the Mississippi Capitol building on Monday, a day ahead of a highly anticipated and controversial special election in the state.
State officials said the nooses were accompanied by handwritten signs mentioning lynchings and Tuesday's special Senate runoff, which has drawn attention to Mississippi's history of racially motivated violence.
The Mississippi Department of Public Safety, which is investigating the incident, said the items were placed there early Monday morning. Anyone with information about the "several suspects" likely responsible has been asked to contact the department.
"In the early hours of Monday morning, authorities believe several suspects were responsible for posting the signs shown here on the lawn of the Mississippi State Capitol building, along with several nooses," the department wrote in a post Monday afternoon. "DPS will make public more information on this incident as it becomes available in order to help ID these individuals."
The signs, written in red, black and green — the colors of the Pan-African flag — appeared political, focusing mostly on the special election and high-profile African American lynching victims, according to pictures posted by the public safety department.
"On Tuesday, November 27th, thousands of Mississippians will vote for a Senator. We need someone who respects lives of lynching victims," one sign read.
"We're hanging nooses to remind people that times haven't changed," read another.
Another sign referred to Emmett Till, a 14-year-old African American who was lynched in 1955 for allegedly whistling at a white woman.
Another sign noted that Mississippi had the highest record of lynchings between 1882 and 1968 — a statement backed by data on the NAACP's website. There were 4,743 lynchings in the United States between 1882 and 1968 and almost three-quarters of the victims were black, according to NAACP. Mississippi had the most of any state during that time — 581.
U.S. Attorney Mike Hurst of Mississippi's Southern District said the postings would be investigated as "acts of hate and intimidation."
"Let me be perfectly clear — there is absolutely no place in our state for these unacceptable symbols or tactics to intimidate others," Hurst said. "If we find evidence beyond a reasonable doubt that a federal crime has occurred, these criminals will be swiftly prosecuted and held accountable."
"Let us all respond to these despicable acts by voting, working, raising our families, practicing our faith and pursuing the American dream here in our great state without fear or trepidation and in harmony with our fellow citizens," he added.
Republican Lt. Gov. Tate Reeves also condemned the "reprehensible act" and vowed to "support the resources necessary to find those responsible."
The incident came ahead of the closely watched Senate runoff between Republican incumbent Cindy Hyde-Smith and Democrat Mike Espy, who's vying to become the state's first black U.S. Senator since Reconstruction.
The race drew national attention earlier this month when video surfaced showing Hyde-Smith, who's been endorsed by President Donald Trump, praising someone by saying: "If he invited me to a public hanging, I'd be on the front row."
Hyde-Smith apologized "to anyone that was offended" by the comment, which she intended as an "exaggerated expression of regard" for a local rancher who invited her to speak.
Major League Baseball, Pfizer, Walmart and AT&T are among groups and corporations that have asked her to return political contributions in the wake of that scandal.
Copyright © 2018, ABC Radio. All rights reserved.